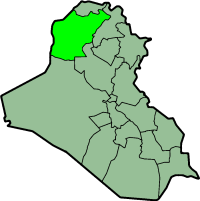 Ninawa (Arabic: نینوى‎code: ar is deprecated , Kurdish: Neynewa, Assyrian: ܢܝܢܘܐ Nîněwâ) is a province in north of Iraq It has an area of 37,323 km². The capital is Mosul which lies near theTigris river. 2,600,000 people live in the province. The ancient Biblical city of Nineveh is also in this province. The name Ninawa is the Arabic name for Nineveh.

All content from Kiddle encyclopedia articles (including the article images and facts) can be freely used under Attribution-ShareAlike license, unless stated otherwise. Cite this article:
Ninawa Province Facts for Kids. Kiddle Encyclopedia.