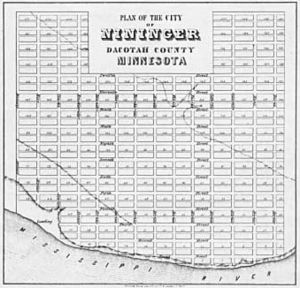 1856 plan for the City of Nininger

Nininger is a ghost town in section 18 of Nininger Township in Dakota County, Minnesota, United States.

The city of Nininger was founded and named by John Nininger, brother in-law of territorial and state Governor Alexander Ramsey. Nininger had high hopes for his namesake city to become state capital, and indeed its population did reach nearly 1,000 by the spring of 1858. The city did not flourish, however, and its post office was discontinued in 1889 after 33 years of operation. Today little trace of the original city remains, although two plaques describe Good Templars Hall and Ignatius L. Donnelly's home.

The most famous resident of Nininger was author Ignatius Donnelly, who was sometimes called "The Sage of Nininger."

All content from Kiddle encyclopedia articles (including the article images and facts) can be freely used under Attribution-ShareAlike license, unless stated otherwise. Cite this article:
Nininger, Minnesota Facts for Kids. Kiddle Encyclopedia.