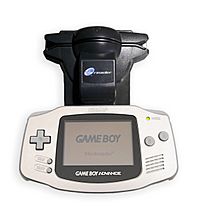 A Game Boy Advance console with the e-Reader.

The e-Reader is a device made by Nintendo for the Game Boy Advance video game console. It is an add-on device which attaches to the Game Boy Advance. It was released in Japan in December 2001 and in North America in September 2002. It is used to read "e-Reader cards," which are paper cards with video game data on it. To use an e-Reader card, the player swipes the card into the e-Reader's slot. e-Reader cards that were released include:

All content from Kiddle encyclopedia articles (including the article images and facts) can be freely used under Attribution-ShareAlike license, unless stated otherwise. Cite this article:
Nintendo e-Reader Facts for Kids. Kiddle Encyclopedia.