No Name Key facts for kids 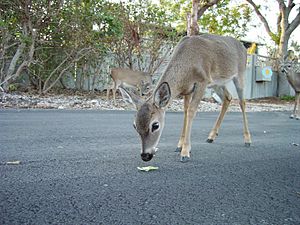 Key deer on No Name Key in the Florida Keys.

No Name Key is an island located in the lower Florida Keys in the United States. It is 3 miles from US 1 and sparsely populated with only 43 homes. It is a fairly small island in comparison to its neighbor, Big Pine Key, which lies about a half mile to its west. It is accessible by a concrete bridge that connects the small island with Big Pine Key and was the terminus of a car ferry that existed before the present Overseas Highway was built on the remains of Flagler's Overseas Railroad.

No Name Key was known for not being connected to the commercial power grid as a local county ordinance prohibited it. Residents mostly used a combination of solar energy and diesel or gas generators.

This prohibition of commercial electricity sparked a lawsuit between the No Name Key Property Owners and the County of Monroe. In May 2013 the Florida Public Service Commission exercised their jurisdiction over public utilities and issued Order PSC-13-0207-PAA-EM declaring the residents had a right to receive commercial electrical power. A week later the circuit court issued a Writ of Mandamus ordering the county to issue the permits necessary to connect the residential homes to the commercial electric grid.

On May 29, 2013 the decades long battle over electricity ended as the residents began connecting to the commercial electric grid.

Native residents of No Name Key include the endangered Key deer.

All content from Kiddle encyclopedia articles (including the article images and facts) can be freely used under Attribution-ShareAlike license, unless stated otherwise. Cite this article:
No Name Key Facts for Kids. Kiddle Encyclopedia.