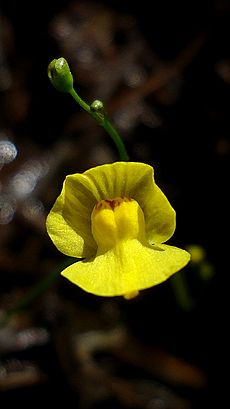 Utricularia gibba has 3% noncoding DNA, which is low for flowering plants.

Non-coding DNA sequences are those parts of an organism's DNA that do not code for protein sequences.

Initially, a large proportion of non-coding DNA had no known biological function. It was known as "junk DNA", particularly in the press. However, it has been known for years that many non-coding sequences are functional. These include genes for functional RNA molecules and DNA sequences such as "start replication" signals, centromeres, and telomeres.

Other noncoding sequences have likely, but not yet discovered, functions. This is inferred from the high levels of sequence similarity seen in different species of DNA.

The Encyclopedia of DNA Elements (ENCODE) project suggested in September 2012 that over 80% of DNA in the human genome "serves some purpose, biochemically speaking". This conclusion was strongly criticized by some other scientists.

All content from Kiddle encyclopedia articles (including the article images and facts) can be freely used under Attribution-ShareAlike license, unless stated otherwise. Cite this article:
Non-coding DNA Facts for Kids. Kiddle Encyclopedia.