Nora Arnezeder (born 8 May 1989) is a French actress and singer. The recipient of a Lumières Award, she is an accomplished actress in the French film industry.

Arnezeder was born in Paris, France. Her father Wolfgang Arnezeder is Austrian and Catholic, whereas her mother Piera Schinasi is an Egyptian Jew and of Sephardic Jewish descent. While she was still in high school, she studied acting, dancing and singing at the renowned drama school Cours Florent. 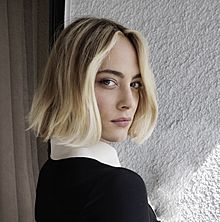 Arnezeder's first major role was in 2008 in Paris 36 (French: Faubourg 36) directed by Christophe Barratier, and for which Arnezeder won the Lumières Award as well as the Étoile d'Or award. In this film, Arnezeder also performed the song "Loin de Paname", that was nominated for the Best Original Song at the 82nd Academy Awards.

In 2009, Arnezeder was the face of Guerlain's fragrance L'Idylle.

In 2013, she was the leading actress in the internationally praised period drama adventure film Angélique directed by Ariel Zeitoun.

She appeared as Chloe Tousignant, a French intelligence investigator, in the main cast of the first two seasons (2015–17) of the CBS series Zoo.

Arnezeder appeared in 6 episodes, between 2014 and 2018, of the series Mozart in the Jungle, playing the feisty, gifted, and rambunctious character of Anna Maria—the wife of the main character.

She played the main role of Evelyn Rey on the single season of the YouTube science fiction series Origin (2018).

In 2021, Arnezeder played Lilly "The Coyote" in Zack Snyder's Netflix film Army of the Dead. She was also cast in the Paramount+ miniseries The Offer.

She starred in the 2021 English-language German-Swiss science fiction thriller film Tides (The Colony), playing the lead role of Blake.

She was in a relationship with English actor Orlando Bloom in 2014.

All content from Kiddle encyclopedia articles (including the article images and facts) can be freely used under Attribution-ShareAlike license, unless stated otherwise. Cite this article:
Nora Arnezeder Facts for Kids. Kiddle Encyclopedia.