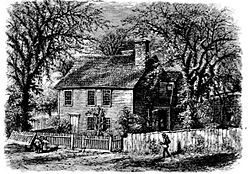 Mowry Tavern (now demolished), a stone-ender on Abbott St. as it looked ca. 1885, with the Cemetery behind it

The North Burial Ground is a 110-acre (0.45 km2) cemetery in Providence, Rhode Island dating to 1700, the first public cemetery in Providence. It is located north of downtown Providence, bounded by North Main Street, Branch Avenue, the Moshassuck River, and Cemetery Street. Its main entrance is at the junction of Branch and North Main. The burial ground is one of the larger municipal cemeteries in Southern New England, and it accepts 220 to 225 burials per year.

From the time of its founding by Roger Williams in 1636, Rhode Island had strict separation of religious and government institutions. Therefore, Providence had no state churches with adjacent public burial grounds, as most New England towns had. Instead, townspeople buried their dead in family plots on individual farms.

In 1700, a town vote was held to establish a municipal cemetery. This cemetery was to be open to the deceased of all faiths, from millionaires to paupers, and even emancipated slaves. 45 acres were set aside; 10 acres were to be used for a cemetery, the remainder for a town common and militia training ground. However, the first official burial didn't take place until one Samuel Whipple was buried here in 1711. There were only about one or two burials per year until 1736, when 14 people were buried.

By the mid-1800s, under the influence of the Rural Cemetery Movement, cemeteries generally became viewed as a place for the general public to enjoy refined outdoor recreation. In Providence, the North Burial Ground was further landscaped. More land was added, along with curving roads and trees, to make the grounds more attractive to the living.

All content from Kiddle encyclopedia articles (including the article images and facts) can be freely used under Attribution-ShareAlike license, unless stated otherwise. Cite this article:
North Burial Ground Facts for Kids. Kiddle Encyclopedia.