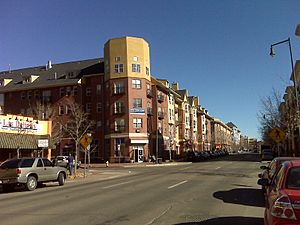 North Capitol Hill, often referred to as downtown along with Lodo, is a center city neighborhood near the Colorado State Capitol. The neighborhood has a diverse population, similar to surrounding neighborhoods of Five Points and Capitol Hill, Lodo, and cannot be defined by a single demographic. Currently, downtown is undergoing significant redevelopment and gentrification, with many young residents and transplants populating the apartments and homes that frequent the area. North Capitol Hill had a violent crime rate of 13.74 incidents per 1,000 residents in 2014, one of the ten highest rates among Denver neighborhoods. The poverty rate is also much higher than city and national averages, with 34.74% of the population living in poverty. North Capitol Hill is bordered by 20th Ave on the north, Park Ave on the northeast, Downing St on the east, Colfax Ave on the south, and Broadway on the west. 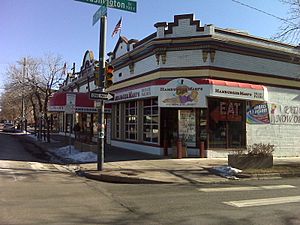 All content from Kiddle encyclopedia articles (including the article images and facts) can be freely used under Attribution-ShareAlike license, unless stated otherwise. Cite this article:
North Capitol Hill, Denver Facts for Kids. Kiddle Encyclopedia.