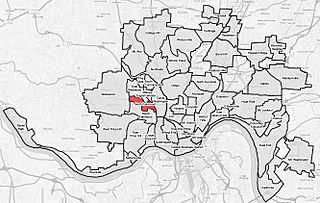 North Fairmount is a neighborhood of Cincinnati, Ohio.

Fairmount began as a sprinkling of farm homes in the early 1800s. Later as the Mill Creek valley became industrialized, the creek bed was spanned and factories were located at the base of the hill. A brewery was established as early as 1825, and several more beer makers arrived in the next decades. The first newcomers were a few French and German immigrants. The community attracted Italians near the turn of the century. Fairmount developed distinct neighborhoods, I.e. North Fairmount, South Fairmount, Millvale (in northeast Fairmount), and English Woods (an early federal housing project).

All content from Kiddle encyclopedia articles (including the article images and facts) can be freely used under Attribution-ShareAlike license, unless stated otherwise. Cite this article:
North Fairmount, Cincinnati Facts for Kids. Kiddle Encyclopedia.