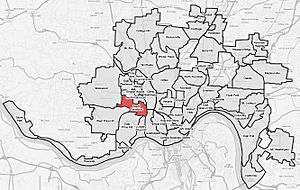 South Fairmount is a neighborhood of Cincinnati, Ohio.

Fairmount began as a sprinkling of farm homes in the early 1800s. Later as the Mill Creek valley became industrialized, the creek bed was spanned and factories were located at the base of the hill. A brewery was established as early as 1825, and several more beer makers arrived in the next decades. The first newcomers were a few French and German immigrants. The community attracted Italians near the turn of the century. Fairmount developed distinct neighborhoods, I.e. North Fairmount, South Fairmount, Millvale (in northeast Fairmount), and English Woods (an early federal housing project).

The Metropolitan Sewer District of Greater Cincinnati (MSD) is in the design stage of a stream daylighting project to restore the Lick Run which used to flow between Queen City Avenue and Westwood Avenue. MSD is required to remove 85% of the annual 14 billion gallons of the combined sewer overflows (CSOs) that occur each year in the outdated sewer system during rain events. The largest contributor to the overflows is CSO 5 in the Lick Run Watershed which dumps 1.7 billion gallons of raw sewage into the Mill Creek annually. By separating the storm water from the sanitary sewage most of the rain water can be sent straight into a creek, thus alleviating the watershed from CSOs.

Two plans have been proposed by MSD to solve the issue. The preferred plan is to daylight the stream, allowing the rain water to collect in the restored Lick Run and discharge into the Mill Creek. This option is anticipated to cost approximately $195 million. Some community opposition has been raised for this alternative with a few residents likening it to an "open drainage ditch" and concern about the existing businesses and building stock between the two thoroughfares.

All content from Kiddle encyclopedia articles (including the article images and facts) can be freely used under Attribution-ShareAlike license, unless stated otherwise. Cite this article:
South Fairmount, Cincinnati Facts for Kids. Kiddle Encyclopedia.