North Fork is an unincorporated community in Lemhi County, Idaho. 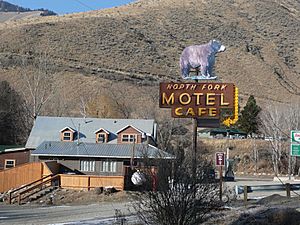 The former North Fork Store and Cafe. The U.S. Forest Service Station can be seen in the background.

Its name is derived from confluence of the south-flowing North Fork of the Salmon River with the north-flowing main Salmon River, which makes a near-right angle turn here to flow westward across the state to Riggins. US 93 serves the community, connecting it with Salmon to the south and Lost Trail Pass to the north.

Longtime families in the community include Cummings, Prestwich, Randolph, Hughes, Smith, and Maxwell. The community of North Fork is built around the “North Fork Store” which also houses a post office and small liquor store. There are two hotels and a U.S. Forest Service Station.

Lewis and Clark traveled through this area and met with a local Indian man, Toby, who got the expedition lost crossing into Montana. Historians believe that they found Toby and enlisted his help as a guide at the confluence of the North Fork and Salmon rivers, or at the mouth of what is now known as “Hull Creek,” named after homesteader John Hull. A monument once stood to commemorate this meeting. This led to the name of the Idaho/Montana mountain pass, "Lost Trail." Also named from this, is the "Lost Trail Powder Mountain" Ski Area. 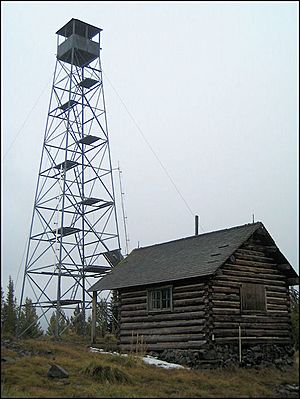 All content from Kiddle encyclopedia articles (including the article images and facts) can be freely used under Attribution-ShareAlike license, unless stated otherwise. Cite this article:
North Fork, Idaho Facts for Kids. Kiddle Encyclopedia.