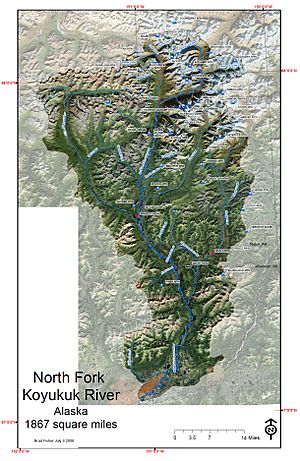 The North Fork of the Koyukuk River is one of the principal forks of the Koyukuk River, approximately 105 mi (160 km) long, in northern Alaska in the United States. It has a watershed area of 1,850 square miles (4,800 km2). It rises on the south slopes of the Continental Divide in the Brooks Range.

It is located in the Gates of the Arctic National Park and Preserve and is part of the Koyukuk Wild and Scenic River as designated by the United States Congress in 1980.

Robert Marshall thoroughly explored the system in 1929, naming many of the major peaks such as Mount Doonerak, Frigid Crags, and Boreal Mountain, the later two forming the Gates of the Arctic.

All content from Kiddle encyclopedia articles (including the article images and facts) can be freely used under Attribution-ShareAlike license, unless stated otherwise. Cite this article:
North Fork Koyukuk River Facts for Kids. Kiddle Encyclopedia.