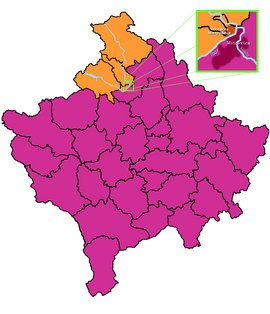 North Kosovo is in orange. The Ibar River divides the city of Kosovska Mitrovica, located at its bend.

North Kosovo is a Serbian enclave in Kosovo. It has over 80,000 residents, at least 98% of them are Christian Serbs. There are about 3,000 Albanians, and about 2000 Turks, Greeks, Gorans, Romas and others.

Unlike the Strpce municipality which is autonomous, North Kosovo is directly run by the Government of Belgrade.

In North Kosovo, Serbian car plates are still used and the Serbian dinar is used as the official currency.

The enclave consists of the 3 municipalities of Zvecan, Leposavic, Zubin Potok (as well as part of Mitrovica. The enclave's area is 1,200 square kilometres (460 sq mi) (11% of the country's total area). Lake Gorazdevac is also in the enclave.

All content from Kiddle encyclopedia articles (including the article images and facts) can be freely used under Attribution-ShareAlike license, unless stated otherwise. Cite this article:
North Kosovo Facts for Kids. Kiddle Encyclopedia.