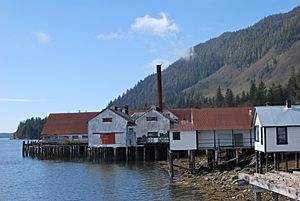 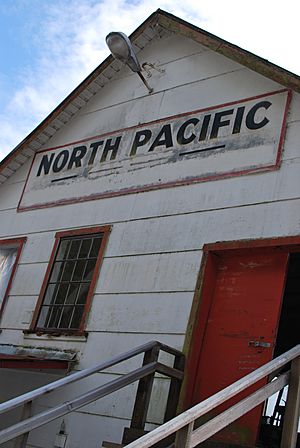 The North Pacific Cannery (NPC) located near Port Edward, British Columbia, Canada, is one of the longest standing canneries in the Port Edward area. NPC was founded in 1889 by Angus Rutherford Johnston, John Alexander Carthew, and Alexander Gilmore McCandless. The plant stopped processing salmon in 1968, becoming a reduction plant until its closure in 1981 after 80 years of operations.

The North Pacific Cannery was built at the mouth of the Skeena River on “Cannery Row”. The 183 acres of land was purchased for $32 by Carthew. In order for the North Coast Marine Museum Society to preserve NPC, it had to receive funds up to $4 million, which was succeeded by the canneries 100th anniversary in 1989. NPC has 25 buildings that can be toured, including a visitor centre, canning loft, First Nations and Japanese bunk houses, European house, and the Mess House, which has been turned into a small café. 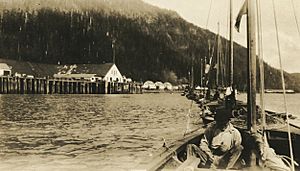 All content from Kiddle encyclopedia articles (including the article images and facts) can be freely used under Attribution-ShareAlike license, unless stated otherwise. Cite this article:
North Pacific Cannery National Historic Site Facts for Kids. Kiddle Encyclopedia.