The North Shore Towers and Country Club is a three-building residential cooperative located in the Glen Oaks neighborhood in the New York City borough of Queens, near the city's border with Nassau County. The complex is located next to the Long Island Jewish Medical Center.

The three constituent residential buildings—Amherst, Beaumont, and Coleridge Towers—which sit on a 110-acre (45 ha) property, are some of the tallest structures in Queens with 34 floors each. The towers are constructed on the highest point of land in Queens County, a hill located 258 feet (79 m) above sea level. This hill is part of the terminal moraine of the last glacial period. The hill is ranked 61 of 62 on the list of New York County High Points. The North Shore Towers complex contains 1,844 apartments ranging from studios to three-bedroom apartments.

The North Shore Towers complex has an 18-hole golf course and its own power plant that produces electricity independent of local power companies. The community also has an indoor shopping concourse that connects the three residential buildings with 22 retail units, as well as fitness centers that include five swimming pools and five tennis courts.

The North Shore Towers is the only gated residential community in New York with its own United States Postal Service zip code, 11005. The zip code is addressed as Floral Park even though the towers are neither in nor adjacent to the Floral Park, Queens neighborhood or the Village of Floral Park. Queens postal zones do not reflect neighborhood or even political boundaries.

The North Shore Towers were originally built as rentals, but in 1985 a filing with the New York State Attorney General's office sought to convert the complex into cooperative apartments. At the time, this was touted as the most expensive conversion in New York City’s history. In 1987, all but 150 units of the North Shore Towers complex were successfully converted to a co-op under a noneviction plan.

The buildings are considered fireproof by the New York City Fire Department because partitions between individual units are designed to stop the spread of flames, also known as compartmentalization. This is evidenced by a 2004 fire caused by a cigarette, where no one was seriously injured because the fire was self-contained.

The North Shore Towers complex has a self-generating power plant that produces electricity independent of local power companies, which as of 31 December  1996 (1996 -12-31)[update] had an 8.9 megawatts (11,935 hp) capacity. This was noted during the New York City Blackout of 1977 when the entire city was without power but lights were still visible in the North Shore Towers. During the Northeast blackout of 2003, the North Shore Towers continued to produce electricity unaffected. This resulted in extensive media coverage on the co-op's self-sufficiency with regard to energy. After seeing this news coverage of North Shore Towers' ability to produce power during the blackout, city tax collectors sent energy tax bills to North Shore Towers and the Penn South co-op in Chelsea, Manhattan. The tax bills were for $1 million each, representing unpaid fuel taxes going back 20 years, even though both co-ops produce their own power. Mayor Michael Bloomberg, Councilman David Weprin (D-Queens), then Councilwoman Christine Quinn (D-Manhattan), and other city officials worked towards settling the tax bills and removing future energy taxes for the co-ops. Then Council Speaker Gifford Miller (D-Manhattan) commented that such co-ops "should be rewarded, not punished for providing their own energy."

In 2000, a North Shore Towers resident noticed a zip code error when making an online purchase. After further investigation in 2001, it was determined that the North Shore Towers was one of four zip codes that were mistakenly charged a Nassau County sales tax of 8.5% instead of the New York City sales tax of 8.25% because the zip codes cross the city line. Residents argued that New York City should receive their tax dollars and not Nassau County. This error was corrected by late 2001. 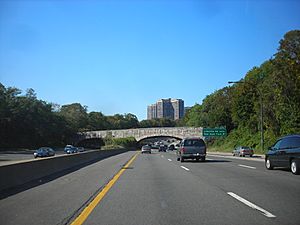 Seen from the east along Northern State Parkway 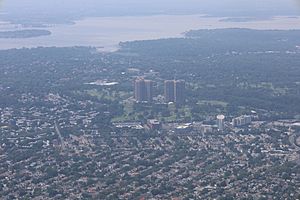 As a gated community and private country club, the North Shore Towers offers a variety of amenities for residents and guests. The on-premises security is always present at the front gate guard booth and in the dispatch office. There are also security patrols 24-hours a day. The on-site management company is Charles H. Greenthal Management Corp., which also manages upscale residential buildings in Manhattan. Superintendents, maintenance staff, doormen, and concierge are staffed in each building 24/7. The North Shore Towers has been described as "where the city meets the suburbs", given its location at the eastern edge of Queens and its suburban feel. As of February 2011[update], the average unit in the Towers sells for $381,099.

There is above ground parking and three levels of underground parking available, able to accommodate 2,363 cars in a subterranean garage and 126 more spots above ground. A car wash, detail, and repair service is available to residents in the underground parking lot. The concierge service offers courtesy bus rides to local shopping destinations. The North Shore Towers are served by the QM6, QM36 express buses to Manhattan, operated by MTA Regional Bus Operations.

All content from Kiddle encyclopedia articles (including the article images and facts) can be freely used under Attribution-ShareAlike license, unless stated otherwise. Cite this article:
North Shore Towers Facts for Kids. Kiddle Encyclopedia.