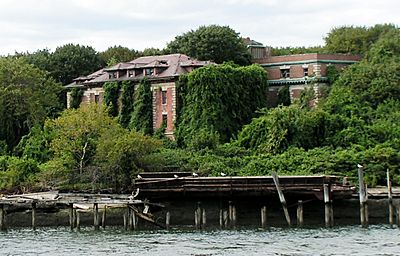 The remains of Riverside Hospital on North Brother Island, 2006.

North and South Brother Islands are a pair of small islands located in New York City's East River between the Bronx and Rikers Island. North Brother Island was once the site of a hospital, but is now uninhabited and designated as a bird sanctuary. Until 1964, South Brother Island was part of Queens County (within Long Island City, beginning in 1870), but it is now part of Bronx County. It had long been privately owned, but it was purchased by the city in 2007.

Both North Brother Island and South Brother Island were claimed by the Dutch West India Company in 1614 and both were originally named "De Gesellen", translated as "the companions" in English.

The northern of the islands was uninhabited until 1885, when Riverside Hospital moved there from Blackwell's Island (now known as Roosevelt Island). Riverside Hospital was founded in the 1850s as the Smallpox Hospital to treat and isolate victims of that disease. Its mission eventually expanded to other quarantinable diseases, with the most recent being the Tuberculosis Pavilion, which was built in 1943, and was almost immediately obsolete.

The island was the site of the wreck of the General Slocum, a steamship which burned on June 15, 1904. Over 1,000 people died either from the fire on board the ship or from drowning before the ship was beached on the island's shores.

Mary Mallon, also known as Typhoid Mary, was confined to the island for over two decades until she died there in 1938. The hospital closed shortly thereafter.

Following World War II, the island housed war veterans who were students at local colleges, along with their families. After the nationwide housing shortage abated, the island was once again abandoned until the 1950s.

Over the years, various New York City mayors have floated ideas about what to do with the island. John Lindsay, for instance, proposed to sell it, and Ed Koch thought that it could be converted into housing for the homeless. The city also considered using it as an extension of the jail at Rikers Island.

Now a bird sanctuary for herons and other wading shorebirds, the island is currently abandoned and off-limits to the public. Most of the original hospitals' buildings still stand, but are heavily deteriorated and in danger of collapse, and a dense forest conceals the ruined hospital buildings. In October 2014, New York City Council member Mark Levine, Chair of the City Council's Parks Committee, led a delegation to visit the island, and declared his desire afterwards to open the island for limited "light-touch, environmentally sensitive" public access. In October 2016, New York magazine reported that the Council had commissioned a study from the University of Pennsylvania's School of Design on how the island could be converted into a park with controlled access by the public. The study is due in November, and will be followed by a public hearing.

In the mid-19th century, Alfred W. White, who was in charge of public health for the city, used South Brother Island as the city's first dump, where garbage, manure, offal and carcasses were sent to help clean up the city, which consisted at that time of only Manhattan and its islands. However, the island is only about a half-mile from the Bronx and the country estates of the city's rich, such as William Ligett and Jacob Lorillard, both scions of tobacco families. It was also close enough to the shoreline villages of Queens County to be noxious to them as well, and the combination of Queens villages and wealthy Bronxites convinced the Queens County Supreme Court to stop the dumping.

Jacob Ruppert, a brewery magnate and early owner of the New York Yankees, had a summer house on the island that burned down in 1909. No one has lived on the island since then, and there are no structures extant. Ruppert owned the island until the late 1930s, and in 1944 it was purchased by John Gerosa, president of the Metropolitan Roofing Supply Company, who had wanted to construct a never-built summer retreat for his workers on the island. 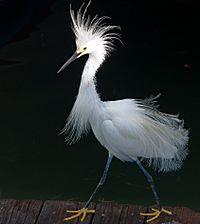 A Snowy egret displaying plumage. This species is one of the inhabitants of the South island.

In 1975, the City sold South Brother Island to Hampton Scows Inc., a Long Island investment company, for $10. Hampton Scows paid property taxes every year but did not develop the island.

In November 2007, the island was purchased in a complicated transaction in which $2 million of Federal grant money from the National Oceanic and Atmospheric Administration's Coastal and Estuarine Land Conservation Program was allocated to the Wildlife Conservation Society and the Point Community Development Corporation. The Trust for Public Land then acquired the island on behalf of those organizations, and then donated it to the city's Parks Department for use as a wildlife sanctuary.It will be managed by the city's Parks Department and the Bronx Zoo. South Brother Island was the 13th island to come under the Parks Department's jurisdiction.

From the 1980s through the early 2000s, North Brother Island supported one of the area's largest nesting colonies of black-crowned night heron. However, as of 2008 this species has abandoned the island for unknown reasons. Barn swallows use the abandoned structures for nesting, and can be seen flying over the island.

North Brother Island was featured in episode 8 ("Armed and Defenseless") of Life After People on the History Channel. It was used as an example of what would happen to structures after 45 years without humans. It was also featured in the Broad City episode "Working Girls" and the Unforgettable episode "The Island".

All content from Kiddle encyclopedia articles (including the article images and facts) can be freely used under Attribution-ShareAlike license, unless stated otherwise. Cite this article:
North and South Brother Islands, New York City Facts for Kids. Kiddle Encyclopedia.