The museum began with a series of studies on ways to preserve Nova Scotia's industrial heritage beginning in 1974. A curator was hired and the collection was started in 1986. Construction began in 1990 and the museum opened to the public in 1995. The museum occupies a site beside the Trans Canada Highway which includes some of the oldest industrial sites in Nova Scotia including the Foord Pit, once the deepest coal mine in the world and the Albion Railway, the first passenger and freight railway in Canada. 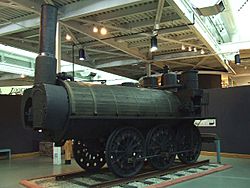 The collection comprises 30,000 objects. Notable artifacts include the Albion Railway's Samson locomotive, the oldest railway locomotive in Canada and the Victorian, a horseless carriage, the first gasoline powered car built in the Maritimes. The museum has extensive hands on galleries that explore the evolution of industry and work in Nova Scotia. Highlights include a large exhibit on coal mining in Nova Scotia including a special display on the Westray Mine disaster which took place near the museum in 1992.

All content from Kiddle encyclopedia articles (including the article images and facts) can be freely used under Attribution-ShareAlike license, unless stated otherwise. Cite this article:
Nova Scotia Museum of Industry Facts for Kids. Kiddle Encyclopedia.