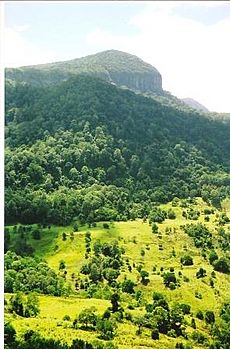 Numinbah Nature Reserve is part of the Mount Warning caldera, in the Border ranges of north eastern New South Wales in Australia. Mount Warning is a volcano that erupted more than 23 million years ago. The 892 hectare Reserve is part of the Shield Volcano Group of the World Heritage Site Gondwana Rainforests of Australia listed in 1986. It was added to the Australian National Heritage List in 2007. The park is also part of the Scenic Rim Important Bird Area. It is important in the conservation of several species of threatened birds.

In New South Wales the Reserve is bounded by privately owned land. It includes an area of escarpment rising to over 1000 metres that is part of state border with Queensland. It is intended to be a place where the plants and animals are protected from humans, domestic animals and feral pests.

All content from Kiddle encyclopedia articles (including the article images and facts) can be freely used under Attribution-ShareAlike license, unless stated otherwise. Cite this article:
Numinbah Nature Reserve Facts for Kids. Kiddle Encyclopedia.