Kids Encyclopedia Facts
This page is about the figure in French folklore. For the moon, see Oberon (moon). 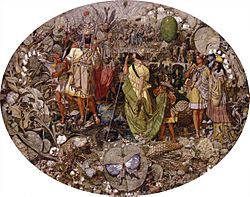 Oberon (also spelled Auberon) is a king of the fairies in medieval and Renaissance literature. He is best known as a character in William Shakespeare's play A Midsummer Night's Dream. In this play, he is married to Titania, the Queen of the Fairies. His servant is Puck. Puck plays tricks.

In the play, Oberon and Titania are arguing. Titania falls asleep. Oberon tells Puck to put a potion in her eyes. This potion will make her love the first thing she sees when she wakes. She sees a man with a donkey head. Oberon and Titania make up. All ends happily.

All content from Kiddle encyclopedia articles (including the article images and facts) can be freely used under Attribution-ShareAlike license, unless stated otherwise. Cite this article:
Oberon Facts for Kids. Kiddle Encyclopedia.