Oglethorpe Mall is a super-regional shopping mall on the Southside of Savannah, Georgia.

Named after General James Oglethorpe, the founder of Savannah, the mall has expanded since its opening in 1969 to nearly one million square feet. Among its features are several restaurants, a food court, and 118 stores. It is anchored by Belk, J. C. Penney, and Macy's. The center also features junior anchors Barnes & Noble, Old Navy, and DSW. It is owned by Brookfield Properties Retail Group. 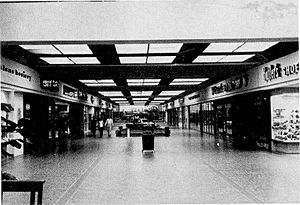 Additional growth came in 1982 when a 230,000-square-foot (21,000 m2) expansion wing was added off Center Court featuring J. C. Penney and Levy's of Savannah. In February 1986, Levy's was acquired by Maas Brothers of Tampa, Florida. In 1988 Maas Brothers was consolidated into Jordan Marsh, a major Federated Department Stores chain based in Florida and New England.

Until 1989, the mall featured its original 1969 design elements. A significant renovation changed the feel of the mall altogether by featuring "coastal" design elements like whitewashed wood, tabby walls, and lighter paint choices. The mall is extensively lit during the day by natural lighting from skylights that were installed during the renovation. A new tile floor was installed, and would win design awards in 1990. A new two-level parking garage completed the project in the summer of 1990. Further consolidation saw the closure of Jordan Marsh in September 1991. In 1992, the Maas Brothers/Jordan Marsh store was converted into general mall space, and a new 135,000-square-foot (12,500 m2) Rich's was added to the mall. McCrory left the mall in 1994 and was replaced by Stein Mart the following year.

A section of the mall known as The Promenade (a corridor decorated with neon lights and glass block, built in 1985 as a replacement for Adler's, which consisted of various stores and a restaurant) was replaced in 2000 with Barnes & Noble. A new food court was opened in 2002, and the Abercorn Street façade was extensively upgraded through the 2000s. Rich's was folded into Macy's in 2005.

In March 2016, Piccadilly Cafeteria closed after 47 years of business, after originally operating as Morrison's up until 1998, when Piccadilly acquired the chain. The location was soon replaced with a DSW, which also took over the adjacent Lady Foot Locker and Manhattan stores.

On August 22, 2018, Sears announced that it would be closing in November 2018 as part of a plan to close 46 stores nationwide. With the store closed, Belk is the only anchor original to the mall's 1969 opening. However, Seritage Growth properties, a Real Estate Investment Trust who purchased the Sears building along with 234 other properties from Sears Holdings in 2015, plans to replace Sears with an assortment of smaller retail spaces. Furthermore, in 2019, H&M will open its third Savannah area store in an in-line portion of the mall.

Additionally, in 2018, the mall received its first facelift since 2002. New interior and exterior mall signage, interior paint, ceilings, and tile floors were installed to update the appearance of the mall.

All content from Kiddle encyclopedia articles (including the article images and facts) can be freely used under Attribution-ShareAlike license, unless stated otherwise. Cite this article:
Oglethorpe Mall Facts for Kids. Kiddle Encyclopedia.