Boston's Old City Hall was home to its city council from 1865 to 1969. It was one of the first buildings in the French Second Empire style to be built in the United States. After the building's completion, the Second Empire style was used extensively elsewhere in Boston and for many public buildings in the United States, such as the Old Executive Office Building in Washington, D.C., as well as other city halls in Providence, Baltimore and Philadelphia. The building's architects were Gridley James Fox Bryant and Arthur Gilman. 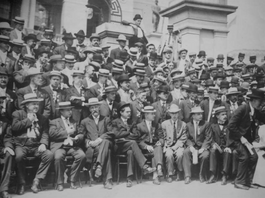 Old City Hall, built between 1862 and 1865, is located at 45 School Street, along the Freedom Trail between the Old South Meeting House and King's Chapel. The Boston Latin School operated on the site from 1704 to 1748, and on the same street until 1844.

Also on the site, the Suffolk County Courthouse was erected in 1810 and converted to Boston's second city hall in 1841, being replaced by the current building twenty-four years later. Thirty-eight Boston mayors, including John F. Fitzgerald, Maurice J. Tobin, and James Michael Curley, served their terms of office on School Street at this site over a period of 128 years.

With the move to the current Boston City Hall in 1969, Old City Hall was converted over the next two years to serve other functions – an early and successful example of adaptive reuse. The Boston-based architecture firm Finegold Alexander + Associates Inc completed the adaptive use and renovation.

It was listed on the National Register of Historic Places and was designated a U.S. National Historic Landmark in 1970. 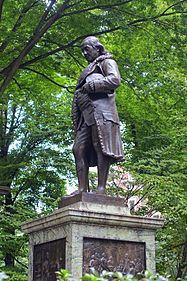 In 2017, Synergy Investments purchased Old City Hall for $30.1 million. With more than 83,000 square feet (7,700 m2) of real estate, it now houses a number of businesses, organizations, and a Ruth's Chris Steak House, Welch & Forbes, Underscore VC, McLane Middleton, Kaymbu and many more, though its most famous tenant, the upscale French restaurant Maison Robert, closed in 2004.

All content from Kiddle encyclopedia articles (including the article images and facts) can be freely used under Attribution-ShareAlike license, unless stated otherwise. Cite this article:
Old City Hall (Boston) Facts for Kids. Kiddle Encyclopedia.