Old Eldon Square is a public square on Blackett Street, Newcastle upon Tyne, England. As well as green space the square is the site of a war memorial and location for the city's Remembrance Day commemoration.

Eldon Square was built as part of the 1825–40 reconstruction of Newcastle city centre.

In 1824 John Dobson was commissioned by Richard Grainger to produce designs for Eldon Square. The design was for three terraces facing a central square, each terrace being of two and a half storeys. The east and west terraces consisted of 27 bays of windows, whilst the north terrace had 39 bays. The first floors had continuous cast-iron balconies with Grecian honeysuckle decoration. Beyond this and the giant Doric pilasters at the end of each terrace there was no other decoration. The terraces were faced with finely cut ashlar. 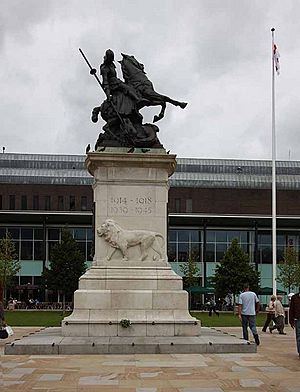 The war memorial (south side)

Designed by Charles Leonard Hartwell, and unveiled by Earl Haig in 1923, the war memorial is situated at the centre of the square. It is a large Portland stone pedestal, with a different relief on each of the four sides. They are:

On the top is a large bronze equestrian statue of Saint George, the patron saint of infantrymen and cavalrymen, slaying the dragon.

The pedestal was designed by Cackett and Burns. The memorial was restored in 1991 and 2007.

In the 1970s the west and north terraces around the square were demolished to be replaced by part of Eldon Square Shopping Centre which now dominates Old Eldon Square. At the time a councillor had stated that the square would be maintained as "it is only the buildings surrounding the square that will be removed."

Some renovation was completed in 2008 and the square now features new landscaping and ground level access to the shopping centre.

All content from Kiddle encyclopedia articles (including the article images and facts) can be freely used under Attribution-ShareAlike license, unless stated otherwise. Cite this article:
Old Eldon Square Facts for Kids. Kiddle Encyclopedia.