Old Spitalfields Market is a covered market in Spitalfields, London. There has been a market on the site for over 350 years. In 1991 it gave its name to New Spitalfields Market in Leyton, where fruit and vegetables are now traded. In 2005, a regeneration programme resulted in the new public spaces: Bishops Square and Crispin Place, which are now part of the modern Spitalfields Market. A range of public markets runs daily, with independent local stores and restaurants - as well as new office developments.

It is situated in the London Borough of Tower Hamlets, just outside the City of London. The closest London Underground and mainline railway station is Liverpool Street.

There has been a market on the site since 1638 when King Charles I gave a licence for flesh, fowl and roots to be sold on Spittle Fields, which was then a rural area on the eastern outskirts of London. After the rights to a market had seemingly lapsed during the time of the Commonwealth, the market was re-founded in 1682 by King Charles II in order to feed the burgeoning population of a new suburb of London.

Market buildings were sited on the rectangular patch of open ground which retained the name Spittle Fields: demarcated by Crispin Street to the west, Lamb Street to the north, Red Lion Street (later subsumed into Commercial Street) to the east and Paternoster Row (later known as Brushfield Street) to the south. The existing buildings were constructed between 1885 and 1893 to the designs of George Sherrin. They were commissioned by Robert Horner, the last private owner of the market, and remain known as the Horner Buildings.

The market was acquired by the City of London Corporation in 1920, to serve as a wholesale market. It was extended westward to Steward Street in 1926, destroying the northern extensions of Crispin Street and Gun Street in the process.

The market stalls were redesigned by architects Foster and Partners for Old Spitalfields Market in October 2017. 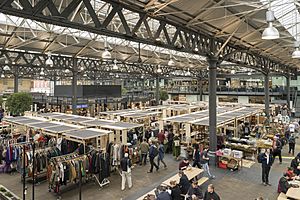 Being at the centre of a revival in the area, the eastern end of Spitalfields retained its old charm in Horner Square and Horner Buildings, which are Grade II listed buildings. The Victorian buildings and the market hall and roof have been restored and Spitalfields is now one of London's major markets. The market square is a popular fashion, arts and crafts, food and general market, open seven days a week, but is particularly busy at weekends.

In the late 20th century, there was a dispute between the owners, the City of London Corporation and local residents about the redevelopment of the 1926 market extension at the western end. The Corporation won, and now a Norman Foster-designed office block surrounds the western side of the site, after two-thirds of the historic market were rebuilt to include restaurants, shops and a large indoor arts and crafts market, called the Traders' Market.

The Gun, a pub situated to the south of the market buildings, recalls Tudor times, when the Old Artillery Ground in this area was used by the Honourable Artillery Company to practice with cross-bow, and later guns and artillery pieces.

At the east end, and on the other side of Commercial Street, is Christ Church, a large Nicholas Hawksmoor church.

Old Spitalfields Market currently hosts a vintage market each Thursday, a vinyl fair some Fridays and a general arts and craft market throughout the week continuing through to the weekend.

All content from Kiddle encyclopedia articles (including the article images and facts) can be freely used under Attribution-ShareAlike license, unless stated otherwise. Cite this article:
Old Spitalfields Market Facts for Kids. Kiddle Encyclopedia.