Old St. Mary's Church is a Roman Catholic church in Cincinnati's historic Over-The-Rhine neighborhood. It is the oldest continually-used house of worship in Cincinnati.

Old St. Mary's is the oldest church in Cincinnati, and since 2017, home to The Cincinnati Oratory, a society of priests and brothers of The Congregation of the Oratory of St. Philip Neri. The church was organized in 1840 by German immigrants, at a time of dramatic growth in the city's population.

Designed in the Greek Revival style by Franz Ignatz Erd, it is the second-oldest German-Catholic parish in the city and the oldest standing church in Cincinnati. The church is 142 feet long, 66 feet wide and with a steeple 170 feet tall. When built, it was the largest church in the Ohio Valley. The original church was dedicated on July 3, 1842.

In 1840, German immigrants were arriving in Cincinnati at the rate of 200 per day. Many of the men donated their own labor to build the church, making the bricks by hand. The number of German immigrants increased in mid-century, with many arriving after the 1848 revolutions in various principalities. The German Catholics built a strong community, with St. Mary's at the heart of it. They also built a parish school and, later, a second school as the number of children increased. In May through August 1849, during the cholera epidemic in Cincinnati, 796 parishioners of St. Mary's died. There were 345 funerals in July. 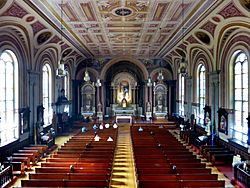 The term "Old" was added to the name of this church in 1904 after St. Mary's in Hyde Park (Cincinnati) was founded.

The parent parish was Holy Trinity Church (Heilige Dreieinigkeit), which was located at West Fifth Street and Barr Street/Mound Street, in Cincinnati's Old West End. Organized in 1834, Holy Trinity was the first German parish and second Roman Catholic parish in Cincinnati. The Holy Trinity Parish was closed in 1958 because of changing demographics.

Joseph H. Albers D.D. was ordained a priest in 1916. Father Albers' first appointment was in Cincinnati as an assistant pastor at Old St. Mary's Church, School and Rectory. As an armed forces chaplain in World War I, Father Albers was decorated and received the Silver Star (presumably the Citation Star which was its predecessor) for bravery and valor. Thereafter, he was assigned to establish the new Diocese of Lansing, Michigan in 1937, and was its first bishop (1937–1964). 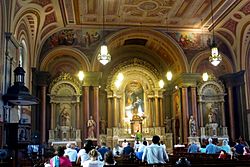 A Mass being celebrated at the church.

The parish, which today draws parishioners from some 50 different zip codes, practices a full range of the rich liturgical, musical, and cultural heritages of the Roman Catholic tradition. It is the home of The Congregation of the Oratory of Saint Philip Neri in Cincinnati. The Church offers Masses in Latin and English every weekday, and in Latin, German, and English every Sunday. The Latin Mass features a schola of professional singers who provide music from the Church's treasury of sacred music each Sunday October through June and on special feast days.

The parish complex includes a rectory and building that once served the parish as a Catholic girls’ grammar school. At present St. John Social Services leases the building from the parish to house several of their outreach programs for the Over-the-Rhine neighborhood.

All content from Kiddle encyclopedia articles (including the article images and facts) can be freely used under Attribution-ShareAlike license, unless stated otherwise. Cite this article:
Old St. Mary's Church (Cincinnati, Ohio) Facts for Kids. Kiddle Encyclopedia.