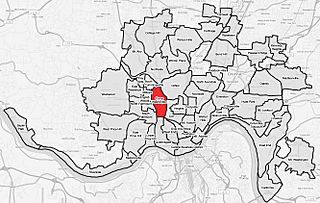 Camp Washington is a neighborhood of Cincinnati, Ohio.

Camp Washington is a city neighborhood of Cincinnati, Ohio, United States. It is located north of Queensgate, east of Fairmount, and west of Clifton and University Heights. The community is a crossing of 19th century homes and industrial space, some of which is being converted into loft apartments.

The first Ohio State Fair was held in Camp Washington in 1850. It had been scheduled the year prior but delayed due to a severe outbreak of cholera.

This neighborhood is also the location of National Register buildings, including the Oesterlein Machine Company-Fashion Frocks, Inc. Complex and the old Cincinnati Workhouse (designed by Samuel Hannaford), which was destroyed and rebuilt to serve as a drug rehabilitation center. The neighborhood has been home to the award-winning Cincinnati chili parlor, Camp Washington Chili for more than 50 years.

All content from Kiddle encyclopedia articles (including the article images and facts) can be freely used under Attribution-ShareAlike license, unless stated otherwise. Cite this article:
Camp Washington, Cincinnati Facts for Kids. Kiddle Encyclopedia.