Cincinnati chili (or Cincinnati-style chili) is a Mediterranean-spiced meat sauce used as a topping for spaghetti or hot dogs ("coneys"); both dishes were developed by Macedonian immigrant restaurateurs in the 1920s. In 2013, Smithsonian named it one of the "20 Most Iconic Foods in America". Its name evokes comparison to chili con carne, but the two are dissimilar in consistency, flavors and serving methods, which for Cincinnati chili more resemble Greek pasta sauces and the spiced-meat hot dog topping sauces seen in other parts of the United States.

Ingredients include ground beef, water or stock, tomato paste, spices such as cinnamon, nutmeg, allspice, clove, cumin, chili powder, bay leaf, and in some home recipes unsweetened dark chocolate in a soupy consistency. The most popular order is a 'three-way', which adds shredded cheddar cheese to the chili-topped spaghetti ('two-way'), while serving it 'four-' or 'five-ways' comes from addition of chopped onions and/or beans. Dishes are often served with oyster crackers and a mild hot sauce. Cincinnati chili is almost never served or eaten by the bowl.

While served in many local restaurants, it is most often associated with the over 250 independent and chain "chili parlors" (restaurants specializing in Cincinnati chili) found throughout greater Cincinnati with franchise locations throughout Ohio and in Kentucky, Indiana, Florida, and the Middle East. The dish is the Cincinnati area's best-known regional food.

Cincinnati chili originated with immigrant restaurateurs from Macedonia who were trying to expand their customer base by moving beyond narrowly ethnic styles of cuisine. Ethnic Macedonians Tom and John Kiradjieff immigrated from the town of Hrupishta (today's Argos Orestiko in Greece), fleeing the Balkan Wars, ethnic rivalries, and bigotry, in 1921. They began serving a "stew with traditional Mediterranean spices" as a topping for hot dogs which they called "coneys" in 1922 at their hot dog stand located next to a burlesque theater called the Empress, which they named their business after. Tom Kiradjieff used the sauce to modify a traditional Greek dish, speculated to have been pastitsio, moussaka or saltsa kima to come up with a dish he called chili spaghetti. He first developed a recipe calling for the spaghetti to be cooked in the chili but changed his method in response to customer requests and began serving the sauce as a topping, eventually adding grated cheese as a topping for both the chili spaghetti and the coneys, also in response to customer requests.

To make ordering more efficient, the brothers created the "way" system of ordering. The style has since been copied and modified by many other restaurant proprietors, often fellow Greek and Macedonian immigrants who had worked at Empress restaurants before leaving to open their own chili parlors, often following the business model to the point of locating their restaurants adjacent to theaters. 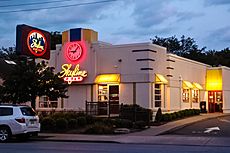 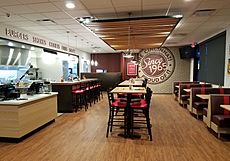 Empress was the largest chili parlor chain in Cincinnati until 1949, when a former Empress employee and Greek immigrant, Nicholas Lambrinides, started Skyline Chili. In 1965, four brothers named Daoud, immigrants from Jordan, bought a restaurant called Hamburger Heaven from a former Empress employee. They noticed that the Cincinnati chili was outselling the hamburgers on their menu and changed the restaurant's name to Gold Star Chili. As of 2015, Skyline (over 130 locations) and Gold Star (89 locations) were the largest Cincinnati chili parlor chains, while Empress had only two remaining locations, down from over a dozen during the chain's most successful period.

Besides Empress, Skyline, and Gold Star, there are also smaller chains such as Dixie Chili and Deli and numerous independents including the acclaimed Camp Washington Chili. Other independents include Pleasant Ridge Chili, Blue Ash Chili, Park Chili Parlor, Price Hill Chili, Chili Time, Orlando based Cincinnati Chili Company, and the Blue Jay Restaurant, in all totalling more than 250 chili parlors. In 1985 one of the founders of Gold Star Chili, Fahid Daoud, returned to Jordan, where he opened his own parlor, called Chili House. Outside of Jordan, Chili House as of 2020 had locations in Iran, Iraq, Libya, Oman, Palestine, Turkey and Qatar.

In addition to the chili parlors, some version of Cincinnati chili is commonly served at many local restaurants. Arnold's Bar and Grill, the oldest bar in the city, serves a vegetarian "Cincy Lentils" dish ordered in "ways." Melt Eclectic Cafe offers a vegan 3-way.

The history of Cincinnati chili shares many factors in common with the apparently independent but simultaneous development of the Coney Island hot dog in other areas of the United States. "Virtually all" were developed by Greek or Macedonian immigrants who passed through Ellis Island as they fled the fallout from the Balkan Wars in the first two decades of the twentieth century.

Raw ground beef is crumbled in water and/or stock, tomato paste and seasonings are added, and the mixture is brought to a boil and then simmered for several hours to form a thin meat sauce. Many recipes call for an overnight chill in the refrigerator to allow for easy skimming of fat and to allow flavors to develop, then reheating to serve. Typical proportions are 2 pounds of ground beef to 4 cups of water and 6 oz tomato paste to make 8 servings.

Preparation of a Cincinnati chili four-way

Ground beef is crumbled into water.

Spices and tomato paste are added and the water brought to a boil, then simmered several hours.

Spaghetti topped with chili, a "two-way".

Onions (or beans) are placed atop the chili.

Ordering Cincinnati chili is based on a specific ingredient series: chili, spaghetti, shredded cheddar cheese, diced onions, and kidney beans. The number before the "way" of the chili determines which ingredients are included in each chili order. Customers order a: 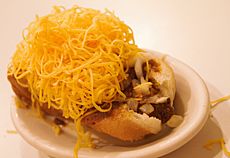 Some chili parlors will also serve the dish "inverted": cheese on the bottom, so that it melts. Some restaurants, among them Skyline and Gold Star, do not use the term "four-way bean", instead using the term "four-way" to denote a three-way plus the customer's choice of onions or beans. Some restaurants may add extra ingredients to the way system; for example, Dixie Chili offers a "six-way", which adds chopped garlic to a five-way. Cincinnati chili is also used as a hot dog topping to make a "coney", a regional variation on the Coney Island chili dog, which is topped with shredded cheddar cheese to make a "cheese coney". The standard coney also includes mustard and chopped onion. The "three-way" and the cheese coney are the most popular orders.

Very few customers order a bowl of plain chili. Most chili parlors do not offer plain chili as a regular menu item. Polly Campbell, former food editor of The Cincinnati Enquirer, calls ordering a bowl of chili, "Ridiculous. Would you order a bowl of spaghetti sauce? Because that's what you're doing."

Ways and coneys are traditionally served in a shallow oval bowl. Oyster crackers are usually served with Cincinnati chili, and a mild hot sauce such as Tabasco is frequently available to be used as an optional topping to be added at the table. Locals eat Cincinnati chili as if it were a casserole, cutting each bite with the side of the fork instead of twirling the noodles.

The name "Cincinnati chili" is often confusing to those unfamiliar with it because the term "chili" evokes the expectation of chili con carne, which it "bears no resemblance to." Cincinnati chili is a Mediterranean-spiced meat sauce for spaghetti or hot dogs, and is very seldom eaten by the bowl as is typical with chili con carne. It is common for Cincinnatians to describe it starting with, "Well, it's not really chili..." Cincinnati Enquirer food editor Chuck Martin and Cincinnati Magazine dining editor Donna Covrett agree, "It is not chili." Cincinnati chili is always seasoned with cinnamon, allspice, cloves, cumin, nutmeg, and chili powder. Many home recipes call for a small amount of dark unsweetened chocolate, but according to Dann Woellert, author of The Authentic History of Cincinnati Chili, "There is no chili parlor in Cincinnati that uses chocolate in its chili." It is normally of a thin consistency, closer to a soup than a stew, and contains no vegetables or chunks of meat, though it is common to find large pieces of cayenne pepper hulls in Empress chili. The flavors, consistency and serving method are more similar to Greek pasta sauces or the spiced meat sauces used to top hot dogs in Rochester and other parts of Upstate New York, Rhode Island, and Michigan than they are to chili con carne.

All content from Kiddle encyclopedia articles (including the article images and facts) can be freely used under Attribution-ShareAlike license, unless stated otherwise. Cite this article:
Cincinnati chili Facts for Kids. Kiddle Encyclopedia.