Nick Tahou Hots is a Rochester, New York restaurant known for a dish called the Garbage Plate. The restaurant was founded in 1918 by Alex Tahou, the grandfather of the 21st-century owner (also named Alex Tahou), and named for Nick Tahou, the founder's son, who operated the establishment until his death in 1997. While there are other Upstate New York variants, Nick Tahou's is the originator of the trademarked Garbage Plate. 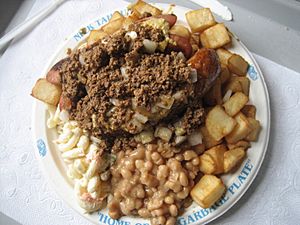 A Garbage Plate, according to a 2010 archive of the restaurant's official website, starts "with a base of any combination of home fries, macaroni salad, baked beans, or french fries topped by your choice of meats and dressed to your liking with spicy mustard, chopped onions, and our signature Nick Tahou's hot sauce. Each plate comes with two thick slices of fresh Italian bread and butter."

Another site wrote that Tahou "concocted his original combo plate with two hamburger patties and a choice of two sides — usually some combination of home fries, macaroni salad, and beans. The contents are often laced heavily with ketchup and hot sauce, and mixed together before eating. Rolls or white bread are served on the side." Health.com named the Garbage Plate the fattiest food in the state of New York.

The dish has spawned several imitators with similar names in the Greater Rochester area, including Fairport Hots' "The Hot Plate" and Tom Wahl's "55 Junker Plate."

A charitable Garbage Plate Run is sponsored by the University of Rochester's Sigma Phi Epsilon. Held annually in the spring, this three-man race begins at the U of R River Campus. The first of the team members run 2.2 miles through the city to Nick Tahou's. Once they arrive, the second teammate eats a Garbage Plate as quickly as they are able, then the final teammate runs back to campus to complete the race. In a race titled the "Ironman", one-man teams attempt to complete all three tasks alone. The Mount Hope Family Center is the recipient of all proceeds collected during the event, including sponsor funds and contestant's entry fees. 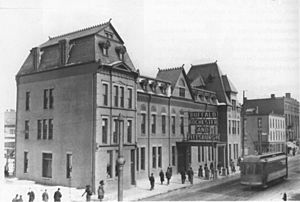 Formerly the Rochester terminal of the Buffalo, Rochester, and Pittsburgh Railway on Main Street West (Now part of NY Route 33) at Oak Street, today the Nick Tahou restaurant (circa 1900)

In the mid-1950s, Nick Tahou's hot dog stand was located in a smaller building just to the west of its longtime location. From 1979 to 2007, there were two Nick Tahou Hots restaurants in Rochester: one in downtown Rochester and a satellite restaurant on Lyell Avenue (NY Route 31) in Gates. In 2007, Steve Tahou and his sister Joanne Tahou-Demkou, the children of Ike Tahou (Nick's brother), assumed full ownership of the Lyell Avenue location and renamed it Steve T. Hots and Potatoes. Steve Tahou returned to using Rochester-based Zweigle's hot dogs and Italian sausages, which were used in the original garbage plates at Nick's. The original West Main Street location continue to use the trademarked "Nick Tahou" and "Garbage Plate" names, and continue to use the Nick Tahou Hot Dog branded dogs in their plates. While previously open all night, the downtown restaurant began closing at 8 p.m. in 1998 in voluntary compliance with the city's effort to reduce troublesome night spots. Steve T.'s remains open 24 hours a day.

There was also a short-lived Nick Tahou's operation in Oswego, New York that opened in September 1995 adjacent to the SUNY Oswego campus.

Nick's has been featured on Food Network's Unwrapped episode titled "Funny Foods" as well as the City in a Box Monopoly-based board game showcasing famous Rochester locales. The Garbage Plate was also highlighted in the July 2007 issue of the US Airways inflight magazine.

On the November 16, 2009, episode of The Daily Show, host Jon Stewart told the people of Rochester to "Get their heads out of their Garbage Plates." On February 23, 2011, the Food Network filmed a segment for the show The Best Thing I Ever Ate on the recommendation of pastry chef Johnny Iuzzini. A segment in Inside Lacrosse Magazine had an extensive review of the Garbage Plate. Nick Tahou's was also featured on the Travel Channel series Chowdown Countdown, where it ranked No. 81 out of 101 locations. In 2011 it was featured on a Rochester episode of the Travel Channel's Man v. Food Nation, starring Adam Richman.

In the 2012 film The Place Beyond the Pines starring Ryan Gosling, Garbage Plates are mentioned as a "must have" for Bradley Cooper's character when he travels through Rochester, New York.

In 2017, Youtuber Jenna Marbles (who grew up in Rochester) mentioned Garbage Plates as her favorite food and in "My Boyfriend Cooks My Favorite Meal" got her boyfriend, Julien Solomita, to make her a vegan version. Another YouTuber and Rochester native, Andrew Rea of Binging with Babish, recreated the Garbage Plate in one of his weekly episodes.

In 2020, comedian Jim Gaffigan, while on tour in Rochester, stopped by Nick Tahou Hots and enjoyed a Garbage Plate. He subsequently talked about his experience on Conan.

All content from Kiddle encyclopedia articles (including the article images and facts) can be freely used under Attribution-ShareAlike license, unless stated otherwise. Cite this article:
Nick Tahou Hots Facts for Kids. Kiddle Encyclopedia.