Skyline Chili is a chain of Cincinnati-style chili restaurants based in Cincinnati, Ohio. Founded in 1949 by Greek immigrant Nicholas Lambrinides, Skyline Chili is named for the view of Cincinnati's skyline that Lambrinides could see from his first restaurant (which has since been demolished), opened in the section of town now known as Price Hill. It is also the "official chili" of many local professional sports teams and venues, including the Cincinnati Reds, Cincinnati Cyclones, Columbus Blue Jackets and the Kings Island theme park, and also sponsors the Crosstown Shootout, an annual men's college basketball rivalry game between the city's two NCAA Division I teams, Cincinnati and Xavier.

In 1912, Nicholas Lambrinides emigrated to Cincinnati from Kastoria, Greece, and brought his favorite family recipes with him. To save up the money to bring his wife to America as well, he first worked as a cook for a railroad crew and in a hotel kitchen, then opened a short-order diner. After nearly a decade, his wife was able to join him in Cincinnati and they raised five sons.

By World War II, Lambrinides was working as a chef for the original Empress Chili restaurant, where he continued to tinker with a recipe which he had been developing for years. In 1949, he and three of his sons opened their own place on Glenway Avenue, near the top of a steep hill (Price's or Price Hill). That diner was located at the intersection of what is now Quebec and Glenway Avenue. The owners named it Skyline Chili for its panoramic view of downtown Cincinnati. After some local resistance in the predominantly Roman Catholic neighborhood, Skyline developed a large and devoted following—especially on Thursdays and Saturdays, which immediately preceded and succeeded meatless Fridays.

A 4-way with onions and oyster crackers

The family opened a second restaurant in 1953 and the growth of the business accelerated in the 1960s; by the end of the century, there were 110 Skyline restaurants, mostly in Ohio, but with additional establishments in other states including Kentucky, Indiana, and Florida. Lambrinides died in 1962 at the age of 82, but his sons continued to operate and expand the company. They have kept Nicholas's original recipe unchanged since then. According to William Lambrinides, "Dad always said, 'Don't change a thing with the recipe—don't add anything, don't take out anything, it's perfect the way it is'." As a result, Skyline's version has become nearly synonymous with Cincinnati chili. In 1998, the company was sold to Fleet Equity Partners, a New England investment firm, which promised not to change the recipe (which they reportedly keep locked in a safe).

In 2007, the company's board of directors purchased a majority of the Skyline stock previously owned by Chicago-based Prudential Capital Group. 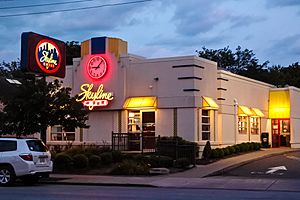 Skyline Chili is unique in that it is not chili con carne, the meat dish that originated in (and is the state dish of) Texas. Instead, Cincinnati chili is a sauce usually used over spaghetti or hot dogs, containing a unique spice blend that gives it a very distinct taste. Officially, the recipe for Skyline Chili is a well-kept family secret among Lambrinides' surviving children, and the recipe is kept in a bank vault.

As of February 2018, Skyline Chili operates 134 restaurants in Ohio (primarily serving Cincinnati, Dayton, and Columbus), Indiana, Kentucky (primarily Louisville and the Northern Kentucky suburbs of Cincinnati), and Florida. The restaurants may be considered fast casual. Diners may sit at a booth or table and be served by a waiter, or at many locations, sit at a counter near employees preparing the food. At all restaurants, dishes are assembled at a centrally located service island so diners may watch their food as it is made. Food prepping takes only a few minutes so one often gets their food quickly. Carry-out and drive-through service are also available at most locations.

All content from Kiddle encyclopedia articles (including the article images and facts) can be freely used under Attribution-ShareAlike license, unless stated otherwise. Cite this article:
Skyline Chili Facts for Kids. Kiddle Encyclopedia.