Olearia teretifolia is an Australian plant in the genus Olearia. Its common name is cypress daisy-bush.

It is a light open shrub reaching a maximum height of 1.5m. Its rodlike leaves are about 6 mm long. White daisy-like flowers about 6 mm in diameter cover the bush in August to October.

It is typically found in Box-Ironbark forests, ranging from South Australia across Victoria.

Under cultivation, it can be pruned after flowering to encourage a bushy shape. It is frost-resistant.

The species was formally described in 1853 by German botanist Otto Wilhelm Sonder based on plant material collected from the Mount Lofty Ranges. Sonder gave it the name Eurybia tertifolia. It was renamed firstly as Aster teretifolius in 1865 and finally Olearia teretifolia in 1867 by Victorian Government Botanist Ferdinand von Mueller. 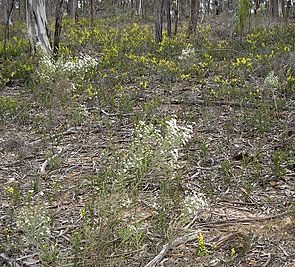 In natural setting amongst gold-dust wattle

All content from Kiddle encyclopedia articles (including the article images and facts) can be freely used under Attribution-ShareAlike license, unless stated otherwise. Cite this article:
Olearia teretifolia Facts for Kids. Kiddle Encyclopedia.