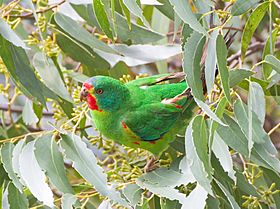 Box-Ironbark forest is a forest or woodland ecosystem found in central Victoria in south-eastern Australia. It is named after the Box and Ironbark trees which grow in the forest. These tree species produce a lot of nectar and pollen throughout the year. This is important for the conservation of many species of birds and other animals.

Box-Ironbark forest lies mainly within the Goldfields region of Victoria. During the main years of the gold rush (1851-1870) it underwent intensive digging and clearing in the goldfields. Large areas of forest were cut down for use in the gold mines and for firewood in surrounding areas. After the gold rush, the forests were still heavily cut for firewood and cleared for farming.

Box-Ironbark forest is found on rocky, often auriferous (gold-bearing), soils, in flat and undulating landscapes at altitudes of 150–600 m above sea level. The average annual rainfall of is 500–800 mm. About 40% of the original forest ecosystem in Victoria is public land, with about 20% protected in conservation reserves. About 55% has been permanently cleared for agriculture, mining and urban development. Remaining forest is in small scattered areas.

Box-Ironbark forest has a canopy of box, ironbark and gum-barked eucalypts, growing to 25 m in height. Below them is an understorey of wattles, small-leaved and prostrate shrubs, herbs and grasses. The main trees are White Box, Red Box, Red Ironbark, Mugga Ironbark, Yellow Gum and Red Stringybark. In some areas they may grow with, or be replaced by, Yellow Box, Long-leaf Box or Silver Bundy. The mix of plants in the groundcover includes the largest concentrations of orchids of any Victorian ecosystem. Small herbs and shrubs found in Box-Ironbark forests include Cheiranthera cyanaea, Philotheca verrucosa, Xerochrysum viscosum, Pultenaea largiflorens, Acacia williamsonii and Stuartina muelleri.

The trees of the Box-Ironbark forest produce a lot of flowers and nectar. They are a major source of nectar and pollen for honeyeaters, lorikeets and many kinds of invertebrates. Flowering of the different species of eucalypts takes place at different times of year so there is always a nectar or pollen source available for migratory, nomadic and resident birds. This means there are both more species, and greater numbers of individuals, of honeyeaters and lorikeets than in any other ecosystem. These birds include Black-chinned, Regent, Fuscous and Brown-headed Honeyeaters, Swift Parrots and Musk Lorikeets. The forest supports the largest numbers of Eastern Grey Kangaroos in Victoria and is a stronghold for Brush-tailed Phascogales, Yellow-footed Antechinuses and Squirrel Gliders.

All content from Kiddle encyclopedia articles (including the article images and facts) can be freely used under Attribution-ShareAlike license, unless stated otherwise. Cite this article:
Box-Ironbark forest Facts for Kids. Kiddle Encyclopedia.