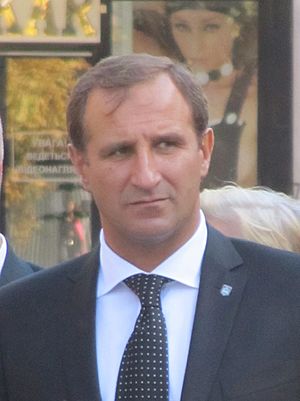 Oleh Meydanovych Babayev (Ukrainian: Олег Мейданович Бабаєв; 21 October 1965 – 26 July 2014) was a Ukrainian politician and businessman. He was the Mayor of Kremenchuk, Poltava Oblast from 2010 until his death. He was also the owner of two football teams in Poltava Oblast.

Babayev was born in Kursk, Kursk Oblast which was then part of the Russian SFSR in the Soviet Union. He was of Azerbaijani ancestry.

All content from Kiddle encyclopedia articles (including the article images and facts) can be freely used under Attribution-ShareAlike license, unless stated otherwise. Cite this article:
Oleh Babayev Facts for Kids. Kiddle Encyclopedia.