Kids Encyclopedia Facts
Not to be confused with Orinda, California. 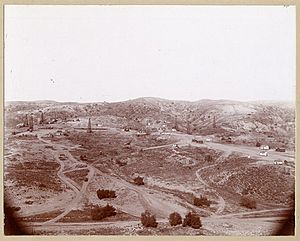 Olinda is a neighborhood in Brea, California, located on Carbon Canyon Road east of the rest of the city. The original village was founded in the 1890s and grew when petroleum was discovered at the adjacent Brea-Olinda Oil Field. In February 1917, Olinda Village and the nearby town of Randolph were incorporated as the city of Brea. The site is now registered as California Historical Landmark #918 registered on January 1. 1978.

Olinda Landfill, located in Carbon Canyon, was opened in 1960 and is scheduled to be closed in December 2021.

The name was revived for a quiet neighborhood built in the hills near the site of the original village, beginning in 1964. The neighborhood has six streets, and holds about 120 homes (many horse properties), and a condominium complex. It is near Carbon Canyon Regional Park and Chino Hills State Park, and surrounded by hills covered with chaparral and home to coyotes, owls, hawks and rattlesnakes.

A Southern California Edison electrical substation in the area is also named Olinda. Olinda gives its name to an elementary school as well as Brea-Olinda High School, which serves Brea and Olinda.

All content from Kiddle encyclopedia articles (including the article images and facts) can be freely used under Attribution-ShareAlike license, unless stated otherwise. Cite this article:
Olinda, Brea, California Facts for Kids. Kiddle Encyclopedia.