Orinda is a city in Contra Costa County, California, United States. The population was 17,643 at the 2010 census, and was estimated in 2012 to have increased to 18,342. Orinda was ranked the second most friendly town in America by Forbes. The town is located just east of the city of Berkeley and is home to many affluent suburban professionals who commute to downtown Oakland, San Francisco, and Walnut Creek. Its location provides for a more rustic landscape, and Orinda's many parks and trails make it a destination for many Bay Area hikers and naturalists.

In the 1880s, the United States Surveyor General for California, Theodore Wagner, built an estate which he named Orinda Park. The Orinda Park post office opened in 1888. The post office's name was changed to Orinda in 1895. Orinda was also the site of Bryant Station, a stop on the failed California and Nevada Railroad around the turn of the 20th century. In later times, the area around Bryant Station was known as Orinda Crossroads.

Orinda's popularity as a year-round residence grew after the 1937 completion of the Caldecott Tunnel, which provided easier access to the west. Bisected by California State Route 24 and framed by its rolling oak-covered hills, the city of Orinda was incorporated on July 1, 1985. Its first mayor was Richard G. Heggie. The city has a station on the Pittsburg/Bay Point Line of the Bay Area Rapid Transit.

The area is characterized by a warm-summer Mediterranean climate (Köppen climate classification Csb) with cool, rainy winters and warm, dry summers. It is located in the Chaparral biome. Because Orinda is located in a hilly area, microclimates often dominate temperature differences in short distances. The Oakland hills often block the cool foggy conditions that can be seen in Oakland and the innerbay. In the summer, fog can spill over the Oakland hills cooling off the area. Heatwaves from the inland areas can be felt much more in Orinda than in Oakland and the innerbay during the summer. In the winter, Orinda often sees more precipitation than surrounding areas because of its higher elevation. Snowfall is rare but not unheard of. A dusting of snow may occur any given year because of the elevation. During stable conditions in the winter, mornings can be rather cold and frosty in downtown and lower lying areas while the higher hills surrounding the area may be several degrees warmer.

There were 6,596 households out of which 36.8% had children under the age of 18 living with them, 72.3% were married couples living together, 5.3% had a female householder with no husband present, and 20.5% were non-families. 16.6% of all households were made up of individuals and 9.5% had someone living alone who was 65 years of age or older. The average household size was 2.66 and the average family size was 2.98.

Sports, recreation, and the arts 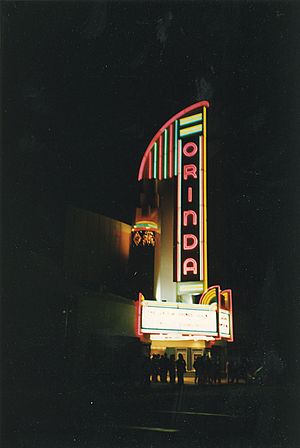 The Orinda Theatre at night

Starting in 2002, Orinda began hosting the Orinda Film Festival, an annual regional film festival taking place at the historic Orinda Theatre managed by Randy Holleschau. In 2005, actor William Hurt attended the festival to promote the film The Blue Butterfly in which he played a leading role. The festival was last held in 2005. The bright lights of the theater are visible for miles around during the night.

In August 2009, the California Independent Film Festival announced they will be making the Orinda Theatre their new home. CIFF held its first event in Orinda on September 18, 2009, in which a screening of The Birds was attended by actress Tippi Hedren. The 12th Annual California Independent Film Festival will be the first time the festival is held in Orinda, opening on April 22, 2010.

The internationally known California Shakespeare Theater, (a.k.a. "Cal Shakes"), performs from June to October at the Bruns Memorial Amphitheater (located on land leased from EBMUD in the hills north of highway 24). The Theater's conservatory operates throughout the year, featuring programs for children, teenagers, young actors, teachers and adults. The current artistic director is Jonathan Moscone, son of the late San Francisco mayor.

The cities of Orinda, Lafayette, and Moraga are collectively known as "Lamorinda".

All content from Kiddle encyclopedia articles (including the article images and facts) can be freely used under Attribution-ShareAlike license, unless stated otherwise. Cite this article:
Orinda, California Facts for Kids. Kiddle Encyclopedia.