SimCity is a computer game where the player has to build a city. They can do whatever they want to their city. It can be built from the ground up or it can be destroyed by a hurricane or a UFO. 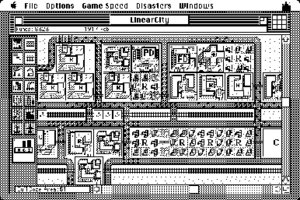 SimCity on the Mac. Most other releases were in color, but had a similar interface.

Sim City was made by game maker Will Wright and first released by the company Maxis. They are now owned by Electronic Arts. The game was first officially released in 1989.

It was very popular because the game had no end. A player could not win or lose. This was the start of all simulation games.

At the start, the player has to build power plants. Power plants make power so the city can have electricity. By building power lines, power is connected to the different areas of the city. Water needs to be pumped in from a river using pipes to connect them to the city.

Smaller areas are marked out. These are made either residential, commercial, or industrial zones. Zones are the only places where buildings can develop. Every city needs the right amount of each zone otherwise the city will not grow.

Roads, schools and hospitals must all be built for the city to get better. Parks and libraries make more people want to move to the city. Railways and highways provide ways to connect to other neighborhoods.

After the first game, many more were created. These were made up of three games, with spin-offs and expansion packs. These were:

All content from Kiddle encyclopedia articles (including the article images and facts) can be freely used under Attribution-ShareAlike license, unless stated otherwise. Cite this article:
SimCity Facts for Kids. Kiddle Encyclopedia.