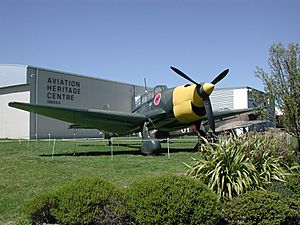 Stuka replica outside of museum

The Omaka Aviation Heritage Centre is an aviation museum located at the Omaka Air Field, 5 km (3 mi) from the centre of Blenheim, New Zealand.

A resurgence of heritage aviation interest began in the Marlborough area in the late 1990s when a group of enthusiasts imported two Chinese Nanchang CJ-6 trainers and established the Marlborough Warbirds Association as a way to foster interest and provide a social network of support. As increasing numbers of aircraft were based at Omaka, word of their existence led to increasing numbers of tourists visiting the facilities. In 1997, a small group of aircraft owners and enthusiasts established the New Zealand Aviation Museum Trust to provide a means of making the aircraft accessible to the public on a more practical and sustainable basis while acting as catalyst to attract aviation business and investment to the Marlborough region and at the same time grow the public understanding and appreciation of aviation.

Stage One of the Omaka Aviation Heritage Centre, which occupies some 3,000 sqm of purpose-built display area was officially opened on 9th Dec 2006. Stage Two is currently under construction and July 2016 is the forecast opening date.

Knights of the Sky Exhibition

Omaka's first exhibition, “Knights of the Sky”, presents one of the world's largest collections of World War I aircraft and rare memorabilia, including a mix of static displays along with flyable planes. The collection (which is on long term loan to the museum) is managed by the 14-18 Aviation Heritage Trust, which is chaired by film director Sir Peter Jackson. As a result of Jackson’s interest the exhibition which was designed by Joe Blakeley was able to employ the talents of Wellington's finest set builders, painters and props specialists, in particular those of Wingnut Films and enhanced with lifelike mannequins by Weta Workshop. Despite its complexity the exhibition took less than 10 weeks to complete from design to opening.

At Easter on alternate (odd) years to the Warbirds over Wanaka air show, the Omaka airfield plays host to an air show called Classic Fighters with an emphasis on World War I aircraft.

The museum's collection contains a wide variety of military aircraft from the First World War as well as artefacts and personal items belonging to some of the most famous aviators of World War I including some items of Baron Manfred von Richthofen memorabilia.

All content from Kiddle encyclopedia articles (including the article images and facts) can be freely used under Attribution-ShareAlike license, unless stated otherwise. Cite this article:
Omaka Aviation Heritage Centre Facts for Kids. Kiddle Encyclopedia.