The Ontario Regiment (RCAC) Museum (an accredited Canadian Forces Museum) is located in Oshawa, Ontario, Canada. The Museum is composed of a Static Section tracing the history of the Ontario Regiment and a Vehicle Section with more than 100 Operational Military Vehicles; Jeeps, Trucks, and Tanks - the largest collection in North America. The museum is located on the South Field of the Oshawa Municipal Airport, 1000 Stevenson Rd N, Oshawa, Ontario (50 km east of Toronto, Ontario).

The museum restores, preserves, displays, and commemorates the service of the Canadian Military (with an emphasis on the Royal Canadian Armoured Corps, Its vehicles, vehicles from its actions, and others) and its role in the history of Canada. It does this through using artefacts to tell the story of the Ontario Regiment from 1850 to present day; and its collection of historical military vehicles to "bring history to life". The museum seeks to honour those who came before and those who are currently serving and to make the history accessible to the public in an engaging, relevant, and exciting way.

The Museum is a non-profit organization with two full-time staff and more than 140 volunteer members. These members act as guides, drivers, and maintainers of the vehicle collection as well as the first line of restorers to bring historic vehicles back to life.

The grounds and buildings

The Museum is housed on the South Field of the Historic Oshawa Executive Airport. The airport opened in June 1941 under the British Commonwealth Air Training Plan as No. 20 Elementary Flying Training School RCAF Station Oshawa. Only three of the original buildings are still standing. Potential military pilots from Commonwealth and Occupied countries were trained on this field. There is one primary museum building composed of the Static or Museum Section, three workshops (not open to the public), a vehicle bay, and the Military Vehicle Conservation Centre. The Museum has use of two other building but these are not open to the public.

The Museum recounts the history through the display of artefacts grouped by type and period - Pre-Confederation, South African War, WW1, WW2, Afghanistan. These artefacts include uniforms, personal items, weapons (deactivated), medals, pictures, and trophies. The Museum Section can be enjoyed by the visitor alone but the use of a guide is recommended to get some of the backstories behind the artefacts.

The Ontario Regiment RCAC Museum is a working museum. Nowhere is that more clear than in the Military Vehicle Conservation Centre. This building was added on in 2018 and provided an additional 15,300 square feet for the vehicle collection. While in this section of the museum, the visitor will not only experience the largest operational historical military vehicle fleet in North America but also see teams of volunteers maintaining and restoring them.

The vehicle collection started in 1976 when the then Honourary Colonel of the Ontario Regiment, Norman Wilton purchased nine Ferret Scout Cars for use as a ceremonial troop. The original nine cars soon grew with the addition of BART - our M4A2(76) W HVSS. Bart was acquired after WW2 from the US and was used as a training vehicle by the Ontario Regiment until the mid 1970s. Since then, the vehicle collection has continued to grow. Some (but not all) of the current inventory are: 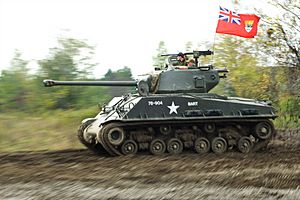 Bart on the move at the Ontario Regiment Museum 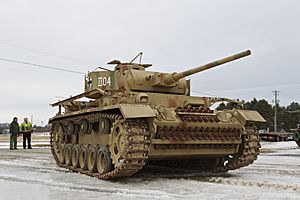 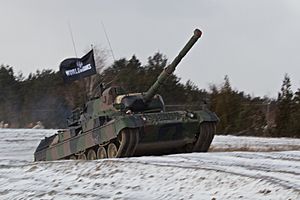 Leopard in the snow at the Ontario Regiment Museum 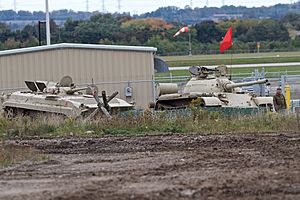 The Museum's goal is to make history relevant and exciting through special events where the public can watch vehicles of the collection move.

Tank Saturdays are single-day events; normally on the second Saturday of each summer month (May to October). These are themed events with a one-hour display show based on that theme. Often, reenactors will be a part of the show. Armoured Vehicle rides are usually available. Tank Saturdays conclude with a "Battle Royale" where two tanks and their crews go head-to-head in the Museum's tank arena.

Aquino Weekend is a two-day world-class event held during the second weekend in June. There will be two themed one-hour battle demonstrations on both Saturday and Sunday. Common themes are "WW2 - Western Front", "WW2 - Eastern Front", "Gulf War", and "Viet Nam". Each simulated battle will compose of vehicles, reenactors, firepower and pyrotechnics. There are also vendors and static reenactor displays. Each day concludes with a "Battle Royale" where two tanks and their crews go head-to-head in the Museum's tank arena.

The Museum offers experiences in their historic vehicles. These experiences are more than rides, they can be a full experience working with the crews preparing the vehicle and a complete tour of all of the crew positions. Check the website or contact the Museum for details and available vehicles.

Group or specialized tours are available.

There are often special events. 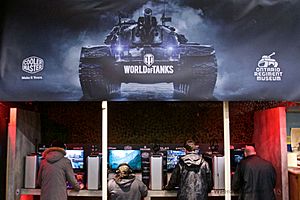 World of Tanks is a partner of the Ontario Regiment RCAC Museum. There is a World of Tanks Gaming station at the Museum where visitors can play the game on fast optimized personal computers, with standard WOT vehicles or customized vehicles from the museum.

All content from Kiddle encyclopedia articles (including the article images and facts) can be freely used under Attribution-ShareAlike license, unless stated otherwise. Cite this article:
Ontario Regiment Museum Facts for Kids. Kiddle Encyclopedia.