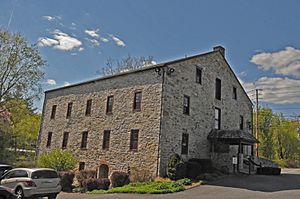 Oregon is an unincorporated community in Manheim Township, Lancaster County, in the U.S. state of Pennsylvania. It is located near the intersection of PA 722 and the Oregon Pike (PA 272, formerly US 222), between Lancaster and Ephrata. Lititz Run passes through the village and joins the Conestoga River by the former Pinetown lumber mill and covered bridge. There are a few dozen houses in the village and a handful of small businesses, not including the surrounding farms. Oregon is served by Red Rose Transit Route 11.

A post office called Oregon was established in 1846, and remained in operation until 1912. The community was named after the Oregon Territory.

All content from Kiddle encyclopedia articles (including the article images and facts) can be freely used under Attribution-ShareAlike license, unless stated otherwise. Cite this article:
Oregon, Pennsylvania Facts for Kids. Kiddle Encyclopedia.