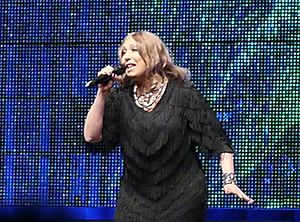 Olga Vital'evna Yakovleva (Russian: Ольга Витальевна Яковлева; 12 October 1970 – 17 January 2015), better known as Origa, was a Russian singer. She worked mostly in Japan from 1993 until her death. She was signed to the record label Gemmatika and sometimes worked with Yoko Kanno. She also released eleven albums and eight singles. She was most well known for singing the intro to the television series Ghost in the Shell: Stand Alone Complex and Fantastic Children.

All content from Kiddle encyclopedia articles (including the article images and facts) can be freely used under Attribution-ShareAlike license, unless stated otherwise. Cite this article:
Origa Facts for Kids. Kiddle Encyclopedia.