Ouimet Canyon is a large gorge in the municipality of Dorion, Thunder Bay District in northwestern Ontario, Canada, about 60 kilometres (37 mi) northeast of the city of Thunder Bay. The gorge is 100 metres (330 ft) deep, 150 metres (490 ft) wide and 2,000 metres (2.0 km; 1.2 mi) long, protected as part of Ouimet Canyon Provincial Park.

There is a walkway consisting of boardwalks and trails, which leads to viewing platforms overlooking the canyon. Visitors to the canyon should remain on the marked trails for their own safety. Also in the Ouimet Canyon area, there are rare alpine flowers that are considered especially beautiful and arctic plants normally found one thousand kilometres further north. The canyon is shown in the IMAX film North of Superior.

Ouimet Canyon Provincial Park, a day-use park with no camping facilities, covers an area of 7.77 square kilometres (3.00 sq mi) around the canyon.

The canyon is believed to have formed when a diabase sill dating from a billion years earlier was split open, either by the weight of advancing glaciers or the large volumes of water released during their retreat. Erosion by wind and rain continued the formation of the canyon. A large rock column known as the Indian Head can be seen from the northern viewing area. 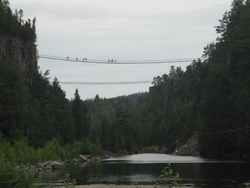 Near Ouimet Canyon is the privately owned and operated Eagle Canyon, which features on-site camping, two footbridges spanning the gorge and a zip line.

All content from Kiddle encyclopedia articles (including the article images and facts) can be freely used under Attribution-ShareAlike license, unless stated otherwise. Cite this article:
Ouimet Canyon Facts for Kids. Kiddle Encyclopedia.