Owings Mills Mall was a shopping mall in Owings Mills, Maryland, United States that hosted 155 stores and eateries, in the Baltimore County, Maryland, community of Owings Mills. It was owned and managed by General Growth Properties (now Brookfield Office Properties). While its main entrance was off Red Run Boulevard between Painters Mill Road and Owings Mills Boulevard, the mall was also accessible from the exit ramps of I-795. It was originally known as Owings Mills Town Center. The mall was demolished and reopened in 2019 as Mill Station.

The mall's final anchor store was JCPenney, which closed its doors on April 8, 2016. Previous anchors were Bambergers, Hecht's, Macy's, Boscov's, Lord & Taylor, Saks Fifth Avenue, and Sears. IFL (International Furniture Liquidators) was temporarily located in the space vacated by Lord & Taylor. Sticks 'n Stuff, a furniture retailer, was temporarily located in the Sears building until it was demolished in 2004. The mall experienced the closures of several national stores, leaving many vacancies in this once upscale shopping mall. 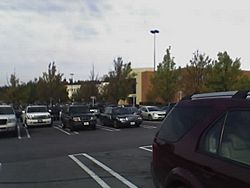 The outside of Owings Mills Mall

The mall was announced as early as 1981, with vague plans that compared it to the White Marsh Mall in size. By late 1983, a summer 1986 opening had been announced as well as the fact that the mall was to feature 3 department store anchors with plans for two more. Anchors Saks Fifth Avenue, Bambergers, and Hecht's were announced in 1984. The mall opened on July 28, 1986 with the mall 95% leased and 80% of stores open. The area was identified as a primary growth center in 1979 by Baltimore County and originally intended to be built around a lake. The Rouse Company planned to develop the mall and surrounding area similar to its town center project in Columbia, Maryland. Environmental regulations changed during the time between the development of Columbia and Owings Mills and the Army Corps of Engineers concluded the lake would have a negative environmental impact. The mall was built, but the area does not include the waterfront focal point initially planned.

The Owings Mills Metro Subway Station was opened by the Baltimore Metro Subway one year after Owings Mills Mall opened. Shuttle bus service with a 10 minute round trip was provided between the mall and the station. This shuttle bus service was discontinued in June 1992, leaving a less frequent bus service that provided this link only every 30 to 60 minutes. Alternatively, a one mile walk was possible between the mall and the Metro station which ran alongside an unused auxiliary parking lot of the mall, then down a hill through grass and vegetation on a winding asphalt pathway, before reaching one of the Metro parking lots.

The mall was quite popular throughout the mid-late eighties and well into the '90s. Exclusive and upscale stores such as Saks Fifth Avenue, Williams Sonoma, and Benetton were tenants. As a result of the renovations at other local Baltimore area suburban malls Towson Town Center and The Mall in Columbia, crime committed in and around the mall, and the shift in the socio-economic climate of the community surrounding the mall, Owings Mills Mall had steadily lost business since that time.

Saks Fifth Avenue closed in 1996, and was replaced with JCPenney.

An expansion in 1998 added Sears and Lord & Taylor, but closed in 2001 and 2002, respectively. Stix n' Stuff, a short-lived furniture retailer moved into the Sears building, but closed in 2004, and the building was subsequently demolished. IFL Furniture moved into the Lord & Taylor building, but was short-lived and closed soon after. The building remained vacant until demolition.

When Macy's acquired Hecht's in late 2006, Macy's moved into the former Hecht's building and Boscov's replaced the former Macy's building. However, Boscov's announced in 2008 that this location would close as part of a plan to close 10 locations due to the company filing for Chapter 11 Bankruptcy. This left JCPenney and Macy's as the remaining anchors.

An October 2010 story on the mall in the Baltimore Sun stated that the mall was 22.6% vacant. WBAL-TV reported on November 10, 2011, that Owings Mills Mall would be demolished in 2013, with a new "outdoor style" mall similar to the revamped Hunt Valley Towne Centre to be completed by 2014. An October 2014 story in the Baltimore Business Journal stated that the mall was "about half vacant."

In late September 2015, the interior of the mall was closed, leaving only Macy's, JCPenney, out-parcel restaurants and movie theater in operation. Macy's closed in November 2015, and JCPenney announced on January 13, 2016, that would close its Owings Mills location in the Spring.

Fixtures from the mall were auctioned in March 2016. Demolition of the mall was proceeding in August 2016.

As of February 2017, the mall was completely demolished, and readied for redevelopment.

On December 5, 2017 it was announced that the property would be redeveloped as a lifestyle center called Mill Station. The $108 million project will be 575,000 square feet and anchored by Costco, Lowe's, and Dick's Sporting Goods. There will be at least 30 total tenants. Construction is set to begin in early 2018 and is expected to be completed in early 2019. The existing 17-screen AMC Theatres, originally a General Cinema opened in 1998, will be fully remodeled.

Owings Mills Restaurant Park opened next to the mall in 1998; it is a collection of five sit-down restaurants such as Red Lobster and the Olive Garden. A mixed-use, transit-oriented development first called Owings Mills Metro Centre (now Metro Centre at Owings Mills), exists alongside Mill Station.

All content from Kiddle encyclopedia articles (including the article images and facts) can be freely used under Attribution-ShareAlike license, unless stated otherwise. Cite this article:
Owings Mills Mall Facts for Kids. Kiddle Encyclopedia.