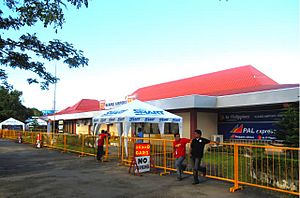 Ozámiz is a city in the Philippines, in the province of Misamis Occidental. There were 110,420 people living there according to the 2000 census.

Although occasionally spelled as Ozamis in official sources, City Resolution 251-05 officially spelled Ozamiz with a "z" as its last letter rather than with an "s".

Ozámiz is named after Senator José F. Ozámiz, a hero of the Philippine resistance against the Japanese during World War 2.

Ozamiz is close to Zamboanga del Sur and Zamboanga del Norte provinces, while across the bay is Lanao del Norte. Ozamiz is 52 kilometres (32 mi) from Maria Cristina Falls, the main source of hydroelectric power in Mindanao. 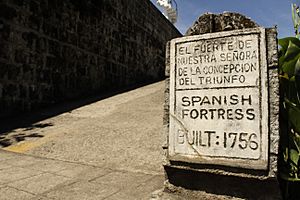 The city of Ozamiz grew out of an old Spanish town called Misamis—a name believed to have been derived from the Subanen word "Kuyamis," a variety of coconut. Other unverified historical sources, however, suggest that the name Misamis came from "Misa" after the Catholic Mass. The origin and the growth of the old Spanish town, Misamis, was due to the presence of the Spanish garrison stationed at the stone fort named Nuestra Senora dela Concepcion del Triunfo, which was constructed some time in the 18th century in order to control the pirate activities originating in the nearby Lanao area. In 1850, the town of Misamis became the capital of the District of Misamis.

In October 1942 Wendell Fertig established the command headquarters of the growing guerrilla resistance to the Japanese occupation of Mindanao in the Spanish fort in the city. His headquarters was abandoned June 26, 1943, in the face of a large Japanese attack. Until the end of the war the Japanese occupied this fort. The Ozamiz city website said of this, "During the Japanese occupation of Misamis in World War II(1943-1945), the "Cotta" was garrisoned by a contingent of Japanese who dug foxholes near or under the walls. This undermining of walls later led to the destruction of the Southwest bastion in the earthquake of 1955."

After the Second World War, Misamis became a chartered city by virtue of Republic Act 321 on July 16, 1948. RA 321 also renamed Misamis to Ozamiz after a WW-II hero José Ozámiz who hailed from the province of Misamis Occidental and who at one time also served as its governor and congressional representative of the Lone District of Misamis Occidental, a delegate to the 1935 Constitutional Convention that resulted in the creation of the 1935 Constitution for the Philippine Commonwealth Government. In 1941, José Ozámiz was elected to the Philippine Senate.

All content from Kiddle encyclopedia articles (including the article images and facts) can be freely used under Attribution-ShareAlike license, unless stated otherwise. Cite this article:
Ozamiz Facts for Kids. Kiddle Encyclopedia.