Péronnas is a commune in the Ain department in the Auvergne-Rhône-Alpes region in eastern France. 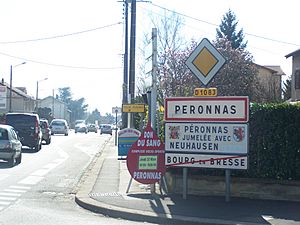 Entrance to the city

The Veyle forms part of the commune's western border.

Péronnas has a football club FC Bourg-Péronnas who play at the Stade Municipal de Péronnas. They are currently playing in the Ligue 2, the second tier of French football.

All content from Kiddle encyclopedia articles (including the article images and facts) can be freely used under Attribution-ShareAlike license, unless stated otherwise. Cite this article:
Péronnas Facts for Kids. Kiddle Encyclopedia.