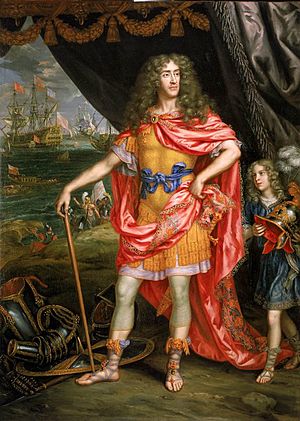 Portrait of James Duke of York with a page-boy

A page or page boy is a young male servant. A different meaning of "page boy", but based on the same idea of one who serves, is for a young boy who helps the bride at a wedding.

In medieval times, a page was a servant to a knight. He had to clean things, help the knight, for example by running messages for him. He also learned how to fight. When he was 14 he usually became a squire. When he was 21 he sometimes became a knight.

Pages were treated well. In the Christmas carol "Good King Wenceslas" we hear about the King's page: "Hither, page, and stand by me, if thou know'st it, telling...."

During the Renaissance and after it became fashionable for black boys and young men to be decorative pages. They wore fancy costumes and served fashionable ladies and lords. This custom of having an "African page" lasted for several centuries. This type of page is almost unheard of today.

All content from Kiddle encyclopedia articles (including the article images and facts) can be freely used under Attribution-ShareAlike license, unless stated otherwise. Cite this article:
Page-boy Facts for Kids. Kiddle Encyclopedia.