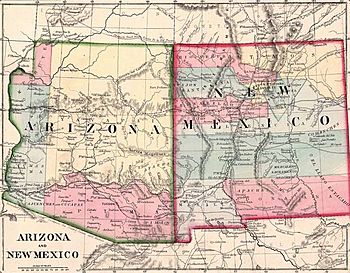 Pah-Ute County is a former county in the northwest corner of Arizona Territory that existed from 1865 until 1871, when the part not taken from it by Nevada was restored to Mohave County. The majority of the former county's territory is now in Clark County, Nevada, including the city of Las Vegas. Due to the transfer of most of the county's land to Nevada, Pah-Ute is known as Arizona's "Lost County". Pah-Ute is an historic spelling of the Paiute tribe's name.

Pah-Ute county was created on December 22, 1865 by an act of the 2nd Arizona Territorial Legislature from the northern part of Mohave County following the sponsorship of Representative Octavius Gass. Created to meet the needs of a rapidly growing population of farmers along the Colorado River, the county seat was initially Callville. The county seat was moved to the Mormon community of St. Thomas on October 1, 1867. (Both communities are now located at the bottom of Lake Mead.) Initial boundaries of the county were those parts of Arizona Territory north of the Roaring Rapids on the Colorado River and west of 113° 20” west longitude.

On May 5, 1866, the United States Congress approved legislation transferring the portions of Pah-Ute and Mohave counties west of the Colorado River and west of 114 degrees west longitude to the state of Nevada. The assignment took effect on January 18, 1867. The Arizona Territory lodged multiple protests with Congress and attempted for several years to have the transfer reversed, but was unable to overturn the change of possession. During this time, Pah-Ute county continued to have representation in the Arizona Territorial Legislature through 1868. Official dissolution of Pah-Ute county occurred on February 18, 1871 when the 6th Arizona Territorial Legislature rescinded the act that created the county and restored the remaining portion to Mohave County.

All content from Kiddle encyclopedia articles (including the article images and facts) can be freely used under Attribution-ShareAlike license, unless stated otherwise. Cite this article:
Pah-Ute County, Arizona Territory Facts for Kids. Kiddle Encyclopedia.