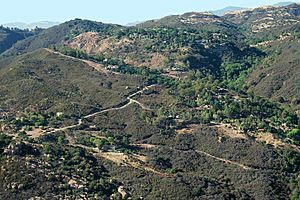 Aerial view from the south

Painted Cave is an unincorporated community located in the Santa Ynez Mountains and is so named due to its proximity to Painted Cave State Historic Park. It is primarily served by Camino Cielo Road and California State Route 154, which link the community both to the nearby Santa Ynez Valley and Santa Barbara, California. The community is made up of roughly 100 homesteads, plus a large number of outlying settlements. Painted Cave is the highest and largest of the inholdings within the Santa Ynez Mountains, and commands an impressive view- on clear days, all seven of the Channel Islands can often be seen. The community is primarily composed of irregular lots, and does not, except in the center of the community, conform to any sort of grid. Painted Cave sits atop a rough plateau, and includes the large Laurel Springs Ranch. The local terrain is extremely hilly, and numerous homes along Rim and Lookout roads approach or even overhang sheer cliffs. 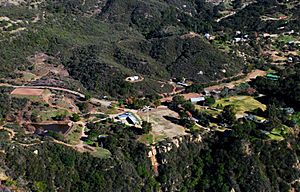 Painted Cave arose through gradual construction in the hills above Santa Barbara, with a mixture of rustic cabins and grand retreats, such as Knapp's Castle. The central impetus for development was the linkage of the access road to the Painted Cave SHP (Painted Cave Road) with Camino Cielo Road. Though there have been many close calls and evacuations, Painted Cave has, as yet, escaped destruction by wildfire, although the 1964 Coyote Fire came closest, sparing the community only due to a fortuitous wind shift, after destroying eight homes.

The 1990 Painted Cave Fire (named for the intersection of 154 and Painted Cave Road, where the arson was committed, not the community) primarily moved downslope and did not directly threaten the community, though it did burn outliers. The Gap Fire and Jesusita Fire of 2009 burned close to the area, but the comparative encirclement of Painted Cave by roads (which pull double duty as supply lines and firebreaks) makes it a comparatively easy place to defend. Painted Cave, by this virtue, is often used as a command center and helitack staging area for Santa Barbara wildfires.

All content from Kiddle encyclopedia articles (including the article images and facts) can be freely used under Attribution-ShareAlike license, unless stated otherwise. Cite this article:
Painted Cave, California Facts for Kids. Kiddle Encyclopedia.