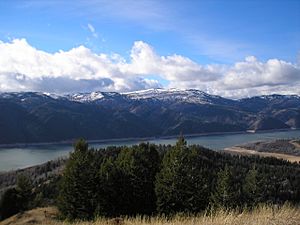 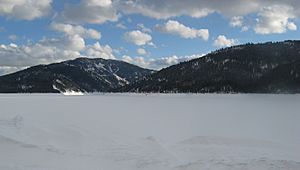 Palisades Dam (National ID # ID00273) is an earth-fill dam on the Snake River in Bonneville County in the U.S. state of Idaho. The dam was completed in 1957 and provides irrigation water, flood control, and recreation; it features a four-turbine hydroelectric power plant. The dam can potentially generate 176.5 MW of electricity. The resulting water impoundment, Palisades Reservoir, has a storage capacity of 1.2 million acre-feet. The dam and power station were listed on the National Register of Historic Places in 2018.

The dam was constructed as the principal feature of the U.S. Bureau of Reclamation's Palisades Project. The Palisades Project supplements the storage and power generation facilities of the earlier Minidoka and Michaud Flats projects, which serve irrigation interest in Idaho on the Snake River Plain, saving about 1,350,000 acre feet (1.67 km3) through the winter for use in the growing season. With 13,571,000 cubic yards of material, the dam was the largest in the USBR system at the time of its construction.

The Palisades Project was authorized to improve the ability of the Snake River irrigation scheme to deal with drought, and addressed shortcomings in water storage that became evident during the 1930s. Initial evaluation started in 1934. The proposed damsite was chosen at Calamity Point, a narrow place in the Snake River canyon with 1,000 feet (300 m) walls. Initially known as the "Grand Valley Site" the name was changed to avoid confusion with the Grand Valley Project in Colorado. Delayed by World War II, construction finally started in 1951 and was completed in 1957, with the generating plant on line the following year. Much of the power is used to pump water in the Minidoka Project. Excess power is sold on the open market. The powerplant was upgraded from a nameplate capacity of 118.75MW to 176.6MW in 1994.

Congress authorized $94,596,000 for multiple-purpose reclamation developments in eastern Idaho when the House and Senate adopted a compromise conference report on the Palisades Dam and Reservoir Project bill, S 2195. President Truman signed the measure Sept. 30, 1950, and it became Public Law 864. The bill re - authorized at an expenditure not to exceed $76,601,000 the Palisades Dam and Reservoir essentially as it first was approved by Congress in 1941, except that the power installation was increased to 112,500 kilowatts. Power output, it was specified, will be incidental to operation of the reservoir principally for irrigation and flood control (cq almanac,1950).

All content from Kiddle encyclopedia articles (including the article images and facts) can be freely used under Attribution-ShareAlike license, unless stated otherwise. Cite this article:
Palisades Dam Facts for Kids. Kiddle Encyclopedia.