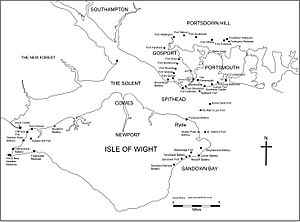 The Victorian forts of Portsmouth

The Palmerston Forts that encircle Portsmouth were built in response to the 1859 Royal Commission dealing with the perceived threat of a French invasion. The forts were intended to defend the Dockyard in Portsmouth. Construction was carried out by the Royal Engineers and civilian contractors (under Royal Engineer supervision). In addition to the newly constructed forts, extensive work was carried out on existing fortifications.

As well as the forts surrounding Portsmouth, further protection for Portsmouth was provided by existing and new defences on the Isle of Wight.

The Portsmouth defences can be split into four distinct groups. The first are the four forts built in the Solent. These sea forts were designed to protect the eastern approaches to Portsmouth Harbour.

The second group are those actually on Portsea Island. None of these were built as a result of the 1859 Royal Commission but did receive improvements because of it.

The third group are those located along Portsdown Hill overlooking Portsmouth. These were a response to advancing weapons technology. This new technology made it possible for shelling accurate over a number of miles to take place. The forts were intended to prevent a hostile force landing further along the coast, approaching Portsmouth from the mainland, taking the tactical high ground to the north of the dockyard. As such, the forts are designed so that all of their main weapons face inland, protecting Portsmouth from the rest of England. This led to a persistent but incorrect urban legend in the Portsmouth area that the forts were built facing the wrong way

The final group are those on the Gosport peninsula. Again, these were to prevent an enemy force landing along the coast and approaching Portsmouth from inland. As such, these again had their main weaponry facing away from Portsmouth.

All content from Kiddle encyclopedia articles (including the article images and facts) can be freely used under Attribution-ShareAlike license, unless stated otherwise. Cite this article:
Palmerston Forts, Portsmouth Facts for Kids. Kiddle Encyclopedia.