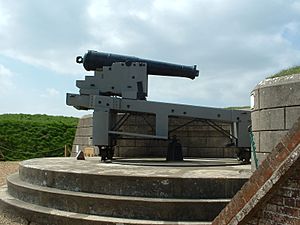 64pdr R.M.L. on traversing carriage – part of the original armament of Fort Nelson.

This article is about Fort Nelson near Fareham, England. For other places with a similar name, see Fort Nelson (disambiguation).

Fort Nelson, in the civil parish of Boarhunt in the English county of Hampshire, is one of five defensive forts built on the summit of Portsdown Hill in the 1860s, overlooking the important naval base of Portsmouth. It is now part of the Royal Armouries, housing their collection of artillery, and a Grade I Listed Building.

Fort Nelson is a typical Polygonal or Palmerston Fort. It is six-sided with a deep ditch protected by three caponiers. Above each caponier is a well-protected emplacement for 13-inch mortars. It was originally entered by two Guthrie rolling bridges and has a barrack block for 172 officers and men, protected by a V-shaped redan. A large open parade ground gives access to the magazines 40 feet underneath it. There are open emplacements on the ramparts for 64 pounder rifled muzzle-loading guns and 6.6 inch howitzers. There are also three Haxo casemates for 7 inch rifled breech-loaders.

Fort Nelson is one of five Portsdown Forts. Built as a result of the 1859 Royal Commission by Lord Palmerston to prevent a French land attack, on the Portsmouth dockyard only 8 kilometres away, because the older Hilsea Lines at the bottom of the ridge were considered insufficient. A series of 6 forts were built along the 7 miles (10 km) of the ridge. From west to east they are forts Fareham, Wallington, Nelson, Southwick, Widley and Purbrook. The line was finished off at the eastern end with Crookhorn Redoubt and Farlington Redoubt. A garrison of around 200 volunteers accompanied by regular army officers would have manned the fort in time of war. Construction was protracted and Fort Nelson wasn't fully armed until the 1890s. The fort was disarmed in 1907 and then used for accommodation. In 1938, it was converted to an area anti-aircraft ammunition store; ten large magazines were built on the parade ground. Fort Nelson was abandoned in the 1950s. 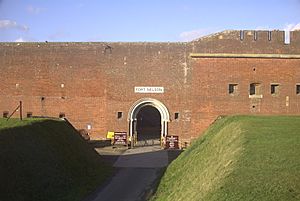 The entrance to Fort Nelson

The fort covers around 19 acres (77,000 m2) and is open all year round, with no charges except for some special events. Live firing demonstrations are held every day, costumed guides, video presentations, and visitors are able to explore the tunnels that run below the fort connecting the magazines with gun emplacements. There are displays demonstrating the living and working conditions of the soldiers who manned the fort, and views over Portsmouth, the Solent, Hayling Island and Gosport, with the Isle of Wight beyond.

Part of the defences of Fort Nelson 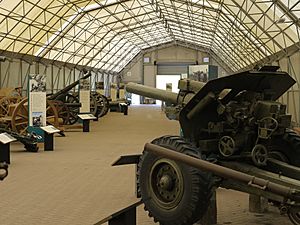 Part of the Artillery Hall at Fort Nelson

All content from Kiddle encyclopedia articles (including the article images and facts) can be freely used under Attribution-ShareAlike license, unless stated otherwise. Cite this article:
Fort Nelson, Hampshire Facts for Kids. Kiddle Encyclopedia.