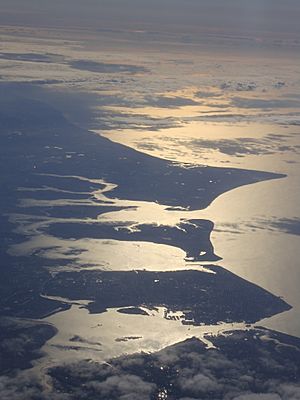 Portsea Island from the west (north to the left), from the air (beneath neighbouring Hayling Island) 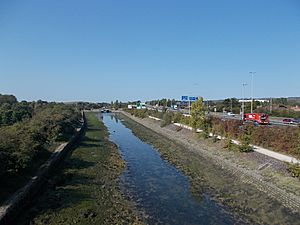 Portsea Island is a flat, low-lying island 24.5 square kilometres (9.5 sq mi; 6,100 acres) in area, just off the southern coast of England in the county of Hampshire, which contains the majority of the city of Portsmouth.

Portsea Island has four railway stations (Portsmouth Harbour, Portsmouth & Southsea, Fratton and Hilsea) connected by an island branch line to the mainland railway network via a short railway bridge at Portsbridge Creek. In addition there are ferry services to Gosport (on the mainland), Hayling Island and the Isle of Wight. There are also ferries to the Channel Islands, northern France and northern Spain.

Portsea Island gives its name to a historic neighbourhood of Portsmouth known as Portsea and also the Portsea Parish of the island.

There have been two Bronze Age hoards found on the island. A hoard of Roman coins has also been found. In 979 AD the island was raided by Danes. At the time of the Domesday Book 3 manors were recorded as being on the island.

Portsea is a parish and narrower, informal area of the city of Portsmouth, occupying much of its south-west.

Engineer Isambard Kingdom Brunel was born in Britain Street in 1806; writer Charles Dickens was born nearby at Landport on 7 February 1812; the professor William Garnett was born in Portsea on 30 December 1850.

The area was originally known as the "Common" and lay between the town of Portsmouth and the nearby dockyard. The Common started to be developed at the end of the 17th century as a response to overcrowding within the walls of the old town. This development worried the governor of the dockyard, as he feared that the new buildings would provide cover for any forces attempting to attack. In 1703, he threatened to demolish any buildings within range of the cannons mounted on the dockyard walls. However, after a petition to Queen Anne, royal consent for the development was granted in 1704. In 1792 the name of the area was changed from the Common to Portsea, and by then it was home to a mixed dockside population.

William Tucker, baptised there in 1784, was convicted of shoplifting from a Portsea tailor, William Wilday, in 1798 and transported to New South Wales on the "death ship" Hillsborough which took convicts and typhus with it from Portsmouth. Tucker escaped and made it all the way back to Britain in 1803, only to be taken to Portsmouth for re-embarkation to Australia. He was later a sealer (seal hunter), established the retail trade in preserved Maori heads and settled in Otago, New Zealand where he became that country's first art dealer before falling victim to his hosts in 1817 and being eaten. The novelist Sarah Doudney was born in Portsea on 15 January 1841.

By the start of the 20th century, Portsmouth council had started to clear much of the slum housing in Portsea. The city's first council houses were built in the district in 1911. The 1920s and 1930s saw extensive redevelopment of the area, with many of the older slums being replaced by new council houses.

The area's proximity to the dockyard resulted in its taking massive bomb damage during World War II. After the war the area was redeveloped as all council housing, in a mixture of houses, maisonettes and tower blocks.

Southsea occupies the southern end of Portsmouth in Portsea Island, within a mile of Portsmouth's city centre focal point, its harbour. Southsea has a thriving commercial area which includes two national department stores and many other well-known high street chains. It combines these large stores with numerous independent traders which includes charity shops, food retailers and furniture/household goods shops. From 1999, Southsea had its own separate town council, but was reintegrated back into Portsmouth City Council in 2010. 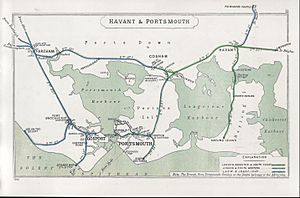 A 1910 Railway Clearing House map of lines around Portsmouth, showing the Southsea Railway

View of Portsmouth and Portsea Island from Portsdown Hill, UK

Fratton is a residential and formerly industrial area of Portsmouth. It consists of mostly Victorian terraced houses, and is typical of the residential areas in the city. In the past it housed a huge railway depot, but this has mostly been dismantled, making way for a shopping complex and the redevelopment of Portsmouth F.C.'s stadium, Fratton Park.

There is also a modest shopping centre on Fratton Road, The Bridge Centre, which is dominated by a large Asda supermarket, and in atmosphere reflects the working class naval and industrial heritage of the neighbourhood, with localised rather than centralised low-budget shops and cafés. Its railway station is one of four serving the island.

Adjoining the eastern green buffer, this extends into the heart of the Baffins neighbourhood which has a large pond and the grounds of Portsmouth College.

Buckland is a central neighbourhood at the heart of the island, directly south of North End and north-east of Landport.

Fronting the beach along the southern shore is the promenade road of Eastney, which includes is punctuated by three forts, small Eastney Fort West (dismantled), Eastney Fort East and large Fort Cumberland, which occupies a modest peninsula. Eastney is the most south-eastern area of Portsea island and forms part of the entrance into Langstone Harbour. Eastney offers a marina and also a foot-passenger ferry service across Langstone Harbour to neighbouring Hayling Island.

Residential parts of Landport are separated from its trade and distribution premises alongside its Albert Johnson Quay by the M275/A3 where the roads change designation. In the westernmost street of this residential side is a large old listed horse trough and row of listed four homes, the Charles Dickens Birthplace Museum in his birthplace home, and Mile End Chapel (a studio).

This small central, typical, terraced district of the city has a few high rise developments and is entirely residential.

Old Portsmouth lies on the south west corner of Portsea Island and forms the eastern side of the narrow entrance to Portsmouth Harbour at the ports mouth. Old Portsmouth contains most of the traditional High Street and heritage of the original old town of Portsmouth, including Portsmouth Point (also known as 'Spice Island') and the Camber Dock.

North End is a mainly residential area to the centre-north of the island.

Hilsea is the north-western district of the city, with a mixture of residential and industrial/retail/distribution areas. It is home to one of Portsmouth's main sports and leisure facilities, the Mountbatten Centre and Trafalgar School. Among its small green buffers to the north and west is Portsmouth rugby football club.

This residential area of terraced streets includes Alexandra Park, with the Mountbatten Sports Centre, and Portsmouth Ferry Terminal. To the north lie Tipner and Hilsea, and to the south are Kingston, Buckland and Commercial Road, the main retail area of the city. Stamshaw is bounded to its west by the M275 motorway and Whale Island, and to the east is North End. The main thoroughfares of Stamshaw, Twyford Avenue and Stamshaw Road, are two axes of a one-way traffic system.

An eponymous infant and junior school serve it. Its park adjoining the feeder road terminating at the city centre (with motorway status) has large fields and an adventure playground.

This small north-west corner has the public parkland point, Tipner Point, and is a mixture of road use, retail/distribution and residential.

Milton is a primarily residential area of the city of Portsmouth with two large public parks, namely Milton Park and Bransbury Park. The area is located on the south eastern side of Portsea Island and is bordered on the east by Langstone Harbour. Eastney lies to the south, Southsea to the south west, Baffins to the north and Fratton to the west. Milton was originally a small village on Portsea Island, surrounded by farmland until it was swallowed up by city expansion in the early years of the 20th century. Portsmouth Football Club's Fratton Park stadium, despite its name, is actually situated in the Milton Ward area of Portsmouth, south of the city's railway line, the boundary of the neighbouring Fratton Ward area.

Copnor is an area on the eastern side of Portsea Island. As Copenore, it was one of the three villages listed as being on Portsea Island in the Domesday book.

In the late 19th and early 20th century the rapid expansion of Portsmouth saw the original village engulfed. The west of the district is now a predominantly residential area of 1930s housing, while the east is an industrial and commercial area.

It was originally intended to have a railway station; the intermediate station between Havant and Portsmouth Town stations when the line opened. However, this never materialised, in spite of the large gap between stations, and the existence of a signalled level crossing for many years (now a bridge). A "Station Road" was laid out, and still exists, however construction on the station never began.

All content from Kiddle encyclopedia articles (including the article images and facts) can be freely used under Attribution-ShareAlike license, unless stated otherwise. Cite this article:
Portsea Island Facts for Kids. Kiddle Encyclopedia.