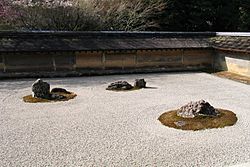 In the art of the Japanese rock garden, the artist must be aware of the rocks' "ishigokoro" ('heart', or 'mind')

Panpsychism is the theory that everything in the universe is somewhat sentient or conscious. They are all connected parts of the whole.

All content from Kiddle encyclopedia articles (including the article images and facts) can be freely used under Attribution-ShareAlike license, unless stated otherwise. Cite this article:
Panpsychism Facts for Kids. Kiddle Encyclopedia.